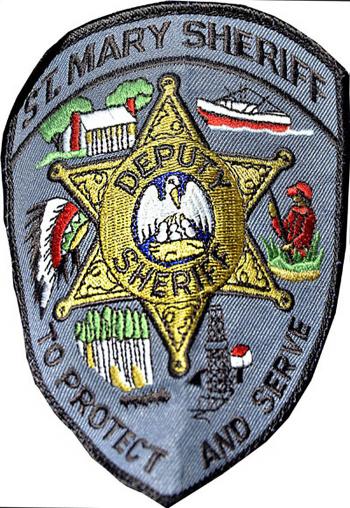 A Bayou Vista woman and man were arrested on firearm charges Wednesday after the woman fired a gun at several people seen running from a home where a burglary was alleged to have occurred, St. Mary Parish Sheriff Mark Hebert said in a news release.
—Stephanie M. Harvey, 36, of the 100 block of Cane Road in Bayou Vista, was arrested at 11 p.m. Wednesday on the charges of illegal discharge of a firearm, criminal damage to property and illegally supplying a felon with a firearm.
—Barry Jones, 28, of the 100 block of Cane Road in Bayou Vista, was arrested at 11 p.m. Wednesday on the charge of possession of a firearm by a person convicted of certain felonies.
A deputy responded to a complaint of a burglary at a residence on Cane Road in Bayou Vista. While en route, the deputy received information that gun shots had been fired at the location, Hebert said. Upon arrival, the deputy made contact with Jones and Harvey.
The complainant stated that several people were seen running behind the residence when Harvey fired multiple shots in that direction, Hebert said. The deputy learned that after firing the rounds, Harvey handed the weapon to Jones, who is a convicted felon, Hebert said.
A bullet hole was located in a nearby shed. Deputies found no signs of forced entry, and nothing was reported stolen, Hebert said. The burglary complaint remains under investigation. The deputy also discovered that the two suspects had fired guns inside the residence on the previous night, Hebert said. Bullet holes were also located inside the home. No bail is set.
Hebert reported responding to 46 complaints in the parish and reported the following arrests in east St. Mary Parish:
—James Pike II, 49, of the 800 block of Degravelle Road in Amelia, was arrested at 7:07 p.m. Wednesday on the charge of attempting to obtain a controlled dangerous substance by fraud. In June, a detective with the St. Mary Parish Sheriff’s Office Narcotics Division received a complaint from a Morgan City medical office of a person attempting to fill a prescription for a controlled dangerous substance early, Hebert said.
The detective learned that Pike had obtained the same prescription drug from other doctors in several other locations outside the parish, the sheriff said. This practice is commonly referred to as doctor shopping, Hebert said. Pike came to the St. Mary Parish Sheriff’s Office in Morgan City in reference to the investigation and was subsequently taken into custody. Bail is set at $50,000.
—Willie Holmes Jr., 43, of the 200 block of Caprie Court in Houma, was arrested at 9:40 a.m. Wednesday on a warrant for theft of goods. Detectives distributed information regarding a theft at Walmart in Bayou Vista. On June 17, at 8:30 p.m., a person is seen on video surveillance exiting the store with a shopping basket containing several items that were not purchased, Hebert said.
The stolen items included a pressure washer, car covers, hoses, and fishing poles, Hebert said.
The detective assigned to the case received information from the Terrebonne Parish Sheriff’s Office identifying the suspect as Holmes. The detective conducted an interview with Holmes and subsequently obtained a warrant for his arrest on the charge of theft of goods. Holmes was transported from the Terrebonne Parish jail and booked into the St. Mary Parish Law Enforcement Center. Bail is set at $1,000.
—Ora L. Garner, 62, of the 300 block of Lawrence Street in Morgan City, was arrested at 2:36 p.m. Wednesday on a warrant for failure to appear on the charges of improper lane usage, operating a vehicle without a driver’s license, and failure to honor written promise to appear. Garner was booked into the St. Mary Parish Law Enforcement Center and a jailer located an active warrant for Garner. No bail is set.
—Erving Knight, 31, of the 1800 block of O Street in Patterson, was arrested at 2:51 a.m. today on the charge of theft of goods. A deputy responded to a complaint of shoplifting at a store in Bayou Vista. The deputy learned that a person riding as a passenger in a pick-up truck was seen loading lawn chairs into the vehicle, Hebert said.
The subject then left the store without paying for the merchandise. The deputy located the vehicle at the above listed residence and learned that Knight was driving the truck at the time of the theft. Knight was jailed.
Berwick Police Chief James Richard reported the following arrests:
—Shaun Sikes, 31, of the 2600 block of Hemlock Street in Morgan City, was arrested at 5:20 p.m. Wednesday on warrants charging him with hit and run, reckless operation of a motor vehicle and no proof of insurance. Sikes was released on bail.
—Brandy Armond, 36, of the 400 block of Tournament Boulevard in Berwick, was arrested at 7:31 p.m. Wednesday on the charges of possession of drug paraphernalia. Armond was jailed.
Patterson Police Chief Patrick LaSalle reported no arrests.

This story was written by Zachary Fitzgerald of The Daily Review staff. Reach him at zfitzgerald@daily-review.com.