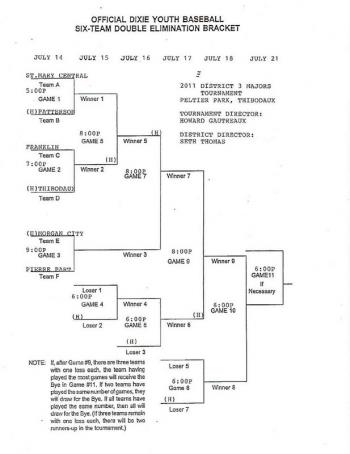 In Pony League action, a squad comprised of athletes across St. Mary will represent the parish. Other participants will travel from Arnaudville, Erath and Coteau.

Action will begin at 6 p.m. Thursday at the Bayou Vista Community Center with Arnaudville facing Erath.

The winners of the first two games will play Friday at 8 p.m., while the losers of the initial games will square off just before at 6 p.m.

Tournament play will continue through Saturday with an “if necessary” game Sunday, if an undefeated team loses in the finals of the double-elimination tournament.

The tournament’s champion and runner-up will advance to the PONY Super Region in Crowley, which will begin July 20.

As for the 12-year-old district tournament, St. Mary Central, Patterson, Franklin, Thibodaux, Morgan City and Pierre Part all will participate in action at Peltier Park.

St. Mary Central and Patterson will begin the tournament with a 5 p.m. matchup followed by Franklin and Thibodaux squaring off at 7 p.m. and Morgan City and Pierre Part meeting in the nightcap at 9 p.m.

The St. Mary Central-Patterson winner will play the Franklin-Thibodaux winner on Friday, while the Morgan City-Pierre Part winner will receive a bye to Saturday’s action.

Tournament action will continue throughout the weekend with a championship game scheduled for Monday.

An “if necessary” game could be played on Thursday if needed to determine the champion of the double-elimination tournament. The game could not be placed on Tuesday or Wednesday, because Peltier Park already has been reserved on those two days for other recreational activities.

In other weekend tournament action, the Dixie Youth Minors (9-year-old) and the 11-year-old state tournaments will begin in Monroe on Friday.

In Minors action, Morgan City, who won the district championship last weekend with consecutive wins against Thibodaux, will play in bracket play with Osterland, Pineville and Bossier Americans.

The local squad will begin play on Friday with an 8 p.m. matchup against Bossier.

Morgan City will resume action on Saturday at 8 a.m. against Pineville and conclude the day at 6 p.m. against Osterland.

The top teams from each pool will advance to bracket play. The winner of Morgan City’s bracket will face the winner of a pool featuring North Sabine, Bossier Nationals, Ponchatoula and West Monroe North. Those two pools’ top teams will square off at 2 p.m. Sunday.

The winner will face the winner of the other two pools at 4:30 p.m. Sunday.

The squad is one of 16 participants in the state tournament.

In the 11-year-old field, Morgan City will be matched up in pool play with Gonzales, Haughton and West Monroe North.

Morgan City, who won the district championship last weekend, will begin play Friday at 4 p.m. against Gonzales and continue play on Saturday against West Monroe North at noon and Haughton at 8 p.m.

The top team from Morgan City’s bracket will play the top team from a second pool — featuring Ponchatoula, Bossier, Monroe and South Sabine — in the state championship game at 4:30 p.m. Sunday.

Eight teams are participating in the tournament.