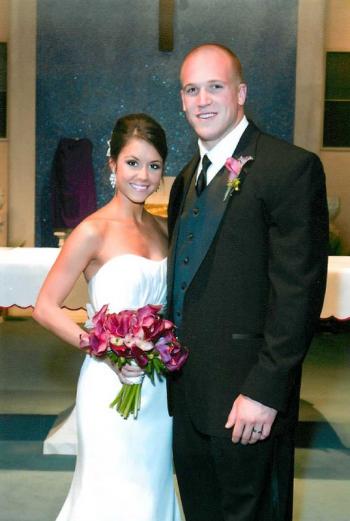 Kelly Joyce Hopkins and Jacob Arnie Cutrera were united in the holy matrimony during an evening ceremony on April 16 at St. Peter Catholic Church in Covington. The Rev. Danny Poche, pastor of Holy Cross Catholic Church in Morgan City, officiated.

The groom is the son of Johnny and Julie Cutrera of Lafayette. He is the grandson of Mr. and Mrs. Charles R. Arnie of Morgan City and the late Mr. and Mrs. Lucien A. “Loppy” Cutrera.

Escorted in marriage by her father, the bride wore a crystal satin gown with a silk flower and band accent. The fit and flare silhouette was designed with a strapless, sweetheart neckline and satin buttons on the zipper. It also featured vertical ruching at the empire waist and a silk flower with Swarovski crystals, rhinestones and beaded embellishments.

She wore a silk flower in her hair.

Her bouquet was of purple calla lilies.

Kimberly Hopkins, sister of the bride, was maid of honor. Bridesmaids were Lauren Johnson, cousin of the groom; Megan Burleson, Danielle Fisher and Stacey Roth, cousins of the bride; Allison Pierce, Emily Schnauder and Roslyn Jones.

Ushers were Kellen Theriot, Rob Shelton, Jeremy Daigle, cousin of the bride, and Jimmy Menkiewicz, uncle of the bride.

A reception followed at Vintage Court in Covington.

The bride is a graduate of Louisiana State University with a degree in Marketing.

The groom is a graduate of LSU. He is an NFL player for the Jacksonville Jaguars in Jacksonville, Fla.

They reside in Jacksonville, Fla.