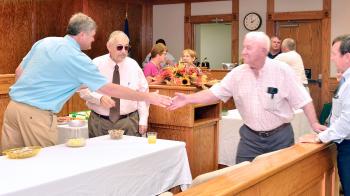 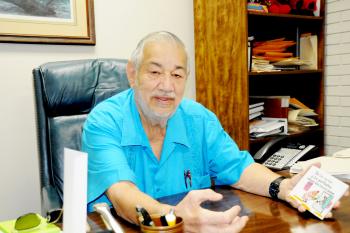 Retiring City Prosecutor Sostenes Ruiz III sits in his Eighth Street office Friday. Ruiz is showing a tile that his father gave him when he started law school. Translated from Spanish, the tile says “Of the foolish and gullible, lawyers make a living,” he said.
(The Daily Review Photo by Zachary Fitzgerald)

The volume of people coming to City Court has continually increased and laws have become more complicated throughout the 33 years Sostenes Ruiz III has been city prosecutor, he said Friday.
Ruiz, 78, is set to retire Friday as city prosecutor. He was first appointed city prosecutor in May 1981. Ruiz was born in Laredo, Texas, and graduated from Tulane University law school in 1962.
Ruiz’s last official day on the job is Friday though his last day in court will be Thursday. Ruiz began his career as city prosecutor at the end of former mayor C.R. “Doc” Brownell’s term, he said.
“It seems like every year we see more and more people coming to City Court, younger people,” Ruiz said. Ruiz guesses the influx of young people coming to City Court may be due to drug use, but he does not know if that is the cause, he said. City Court only handles misdemeanors while district court handles felonies, he said.
“It’s about time I go,” Ruiz said. “It’s been a long time.” His mind is not as sharp as it used to be, he said. Ruiz plans to continue to practice law but will no longer handle contested cases, he said.
Ruiz’s secretary, Lori Beadle, has worked for Ruiz since she graduated high school, he said. “Lori is just a wonderful person. I’m very fortunate,” Ruiz said.
Part of Ruiz’s success and his enjoyment of his job is because of the people he works with at City Court, he said. “They really are friendly and very capable of helping me when I needed help,” Ruiz said.
City Court Judge Kim Stansbury has done a wonderful job as judge, one of many good judges Ruiz has served under, Ruiz said. “Thanks to the staff that he has and him, he’s made my job easier,” Ruiz said.
Still, there were times when Ruiz did not agree with city court judges’ decisions. Under City Court Judge Bob Robertson, Ruiz recalled an incident where the judge wanted to sentence a woman to pick up trash with the City Jail inmates, he said. Ruiz told the judge that he thought the woman should work in the library and not have to pick up trash alongside drunks, he said.
The judge still disagreed so Ruiz told the judge he would not prosecute the case, he said. After that, the judge decided to go along with Ruiz and allow the woman to work in the library as her sentence, he said. “I think it was the appropriate thing,” Ruiz said. “You put certain people in certain areas not with regular or bad people. And not all people are bad. Don’t take me the wrong way.”
Ruiz described his time as city prosecutor as “very interesting,” he said. “Of course, I’m not perfect by a long shot, but I have tried to do the right thing. And I’m sure sometimes I didn’t do the right thing,” Ruiz said.
City Attorney Paul Landry is taking over as city prosecutor, who Ruiz has been helping through the transition over the past five to six months, he said. “He’s a fine, young man, very capable,” Ruiz said.
During Ruiz’s career, he also prosecuted juvenile court cases, which is done behind closed doors, he said.
Ruiz keeps a tile in his office that his father gave him when he started law school. The item reminded Ruiz of his father’s sense of humor, he said. Translated from Spanish, the tile says, “Of the foolish and gullible, lawyers make a living,” he said. “It’s so true because if you just stop to think correctly, you don’t have to have a lawyer,” Ruiz said. “It’s when you start doing foolish things.”
Ruiz’s father only had a sixth grade education in Mexico, but had lots of common sense, he said. “I believe that’s more important than having great knowledge,” Ruiz said.
In a statement, City Court Marshal Kenneth Duval said he has worked with Ruiz the entire 33 years he has been city prosecutor, more than 20 years as a member of the Morgan City Police Department and more than 11 years with the marshal’s office.
“Mr. Ruiz was very passionate about his job,” Duval said. Ruiz’ character is impeccable and beyond reproach, Duval said.
“One trait I always admired about him was he always stood by his decisions whether popular or not and did not attempt to blame others,” Duval said.
Clerk of Court Patricia Ott, Juvenile Clerk of Court Janet LeBlanc, Civil Clerk Cindy Michel and Deputy Clerk of Court Sue Hover said in a news release that “it has been a pleasure for all of us to work with Mr. Ruiz and his secretary, Lori Beadle.” The fact that Ruiz speaks Spanish and could translate, if needed, was fortunate, they said.
“We handle so much paperwork, and we interact with so many different people, but Mr. Ruiz was always patient and considerate of us,” they stated in the release. “He also taught us a lot about the law.”