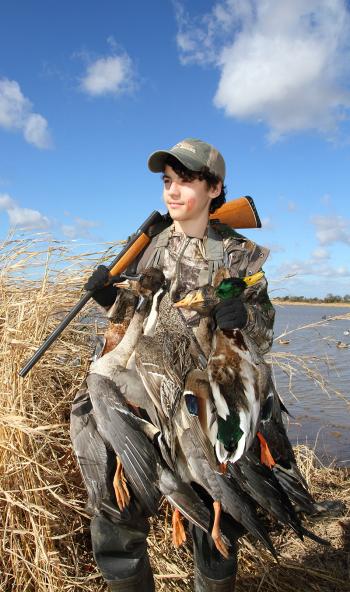 “So, is this the new norm?” I asked Mother Nature after reading the U.S. Fish and Wildlife Services Trends in Breeding Population Report released this past week.
She replied, “What do you mean?”
Mumbling to myself something to the effect — women — I wasn’t up for some passive aggressive discourse that was only going to cause me to lose patience. One thing you don’t ever want to do is lose patience with Mother Nature.
You know that 20 percent chance of thundershowers you typically see in the forecast? That happens to be her way of ruining your afternoon while in the middle of mowing your yard.
“I mean, it looks like you bailed out the prairie potholes in the Dakotas and Canadian Provinces again this year, providing enough rain water for the ducks to nest and breed,” I said.
“You sound disappointed,” she replied. “Aren’t you the one who goes around acting like some big time waterfowl hunter posting pictures to your Facebook page of all the ducks and geese you kill? I thought you’d be happy about the possibility of another 6-bird bag limit for 21 years in a row.”
“I am. In fact I’m ecstatic. Can’t you tell? I wouldn’t be interviewing you if this wasn’t important to me,” I said, trying to be convincing but not doing a good job.
During the last week of April and first week of May, I happened to be vacationing in the upper Midwest chasing Merriam turkeys in Nebraska and South Dakota. Me and my wife’s 3,023-mile odyssey took us through the southern portion of the prairie pothole region known as the duck factory.
Compared to 2014, when the area was teeming with waterfowl, the bone-dry sand hills and farmlands were void of ducks.
I actually bounced my “new norm” thought off a friend of mine in Brainerd, Minnesota. After all, America’s search for alternative energies has some folks believing we can grow our way out of our dependence on fossil fuels if we plant enough corn.
The trend in the upper Midwest is farmers are opting out of the Conservation Reserve Program CRP, tilling their fields and draining the potholes at an alarming rate.
My buddy, Jay Strangis, editor of American Waterfowler Magazine, said, “You make a good point. And I think in times of plenty it’s hard to sell any urgent conservation message. But, your words couldn’t be truer. Mother Nature seems to be real forgiving these days — and thus the false sense of security and subsequent complacency. Remember the grasshopper and ants? When winter finally comes …”
Why Mother Nature was being coy with me didn’t make sense. Other guys — important guys, not some outdoor writer with a glass-half-full mentality who makes decisions about duck harvest numbers — have concerns, too.
Louisiana Department of Wildlife and Fisheries Waterfowl Study Leader Larry Reynolds said, “I’ve been warning of the impending decline in duck populations for three years now. But, instead, we have seen increases to record breeding populations because of extremely wet conditions on both sides of the border. Mother Nature is indeed sparing the waterfowl population from the negative impact of extreme losses in nesting habitat; (Mother Nature sparing waterfowl) that is an excellent characterization, and I hope it continues.”
During the U.S. Fish & Wildlife Service flyovers this spring, the service pretty much reported what my wife and I found during our trip to Nebraska and South Dakota, saying the region was drier this year, especially the southern prairie potholes.
Reynolds mentioned pilot reports posted on the flyways.us website stated many of the early nesting species of ducks simply “over flew” their traditional breeding grounds, opting for wetter land further north.
Concerning the southern strata of the prairie pothole region, Reynolds said, “There is little doubt that production will be lower this year due to more northern settling of the breeding population, the reduced pond count, and the late date at which some of the water arrived on the breeding grounds.
“We have long known that wetlands flooded continuously lose productivity. Periodic drought is a necessary part of the cycle that maintains high prairie-wetland productivity. We also know that high breeding populations lead to lower numbers of juveniles in the fall harvest because of lower reproductive rates,” Reynolds said.
My friend Jay up in Minnesota also mentions that the parklands in northern Alberta, Saskatchewan and Manitoba have been burning, which means it’s dry up there, too.
Moreover, climate prediction models point out, when rain is falling in western Minnesota and northwestern Iowa (Note: areas of prairie pothole region that no longer have much for potholes), less rain is falling in the core pothole regions of the Dakotas. Therefore, if the trend continues for years, the remaining core pothole areas will dry up while the tilled and drained areas will receive most of the water. Not a win for ducks, he says.
“Mother Nature, with a 49.5 million breeding duck population that is 43 percent above the Long Term Average,” I said, “I’m trying to be happy, but …”
“But, what?” She interjected. “Really, John — really! I’m doing my part here. You guys get mallards 51 percent above the LTA, blue winged teal 73 percent above and green winged teal 98 percent. I’m doing my part. So, you better be happy.
“Now you need to do your job, letting the folks know down there in St. Mary Parish I can’t keep this up forever. At some point I have to let those few remaining ponds up north that haven’t gone the way of ethanol production dry up and rejuvenate. And when I do, your days of 6-bird bag limits and 60-day seasons will be over for a while. No, this is not the new norm,” Mother Nature concluded.
If you wish to make a comment or have an anecdote, recipe or story you wish to share, you can contact Flores at 985-395-5586 or gowiththeflo@cox.net, follow him on twitter at gowiththeflo_LA or on Facebook at Gowiththeflo Outdoors.