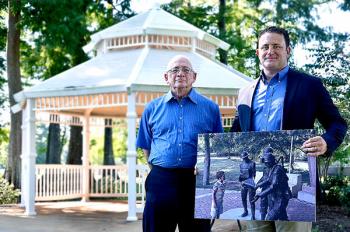 MORGAN CITY — Two local foreign war veterans are working to bring to Morgan City a memorial for their brothers in arms who made the ultimate sacrifice for their country.

Marc Distefano and Terry Mayon are attempting to raise funds for the Fallen Warriors Memorial Project honoring east St. Mary Parish soldiers killed in action, those who died from their wounds and soldiers who died non-combat deaths in World War I through the current wars in Afghanistan and Iraq. Distefano is a veteran of the Iraq war, while Mayon served in Vietnam.

Distefano said, “Lest we forget is a familiar phrase honoring fallen warriors, veterans and (those) missing in action and is heard from those who strive to preserve the memories of sacrifices our men and women who fought and died for our country, for freedom and for our way of life. It is my honor and privilege to do the same.”

The memorial is based on one in Pflugerville, Texas, according to Distefano, the project chairman. He said the St. Mary group is using the same artist and sculptor on the local project. Pflugerville’s memorial depicts service men from three different wars holding out a folded American flag. They stand on a brick walkway and behind them stands a stone marker engraved with the fallen warriors’ names.

The Morgan City memorial will be modified to depict a child reaching out to accept a folded American flag, a typical memorial protocol in the military, Distefano said. He has gotten permission from the city to place the memorial in Cypress Park, previous site of the city’s Swamp Gardens tourist attraction.

Distefano said the memorial is needed to recognize local fallen soldiers, give special thanks to the soldiers’ families for their sacrifice and provide a means for the citizens of Morgan City to take pride in a monument “focused on local acts of courage in the face of armed conflict.”

Mayon has been researching the fallen servicemen from the Tri-City area for the last six years. Mayon said he has compiled all information available about each soldier including pictures when available, a biography, family member names and circumstances of death.

He has identified a “remarkable and sobering” 46 soldiers in east St. Mary to date and is asking families to contact him if they know they had a member who hailed from this area that died in a foreign war. While the website remains under construction, Distefano said eventually the information will be contained there. Also, a complete repository of all information about the soldiers will be given to the Morgan City Archives, Mayon said.

Donations toward the memorial are being collected under the auspices of the Veterans of Foreign Wars Post 4222 in Morgan City. Post 4222 Chairman Sherman Whiting serves as the memorial’s treasurer.

Distefano will be speaking at both the Kiwanis and Rotary Club meetings in the coming months. Any service organization wishing to hear about the project is urged to contact a committee member, he said.