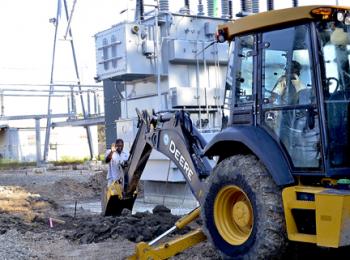 By ZACHARY FITZGERALD
zfitzgerald@daily-review.com
MORGAN CITY — The city’s $37.5 million proposed 2014 consolidated budget has money set aside to continue repairing roads and the sewer system, build more cabins at Lake End Parkway, and improve the city’s riverfront bulkhead.
The proposed 2014 budget includes $545,000 in special revenue funds in the sanitation and sewer department, which was not in the 2013 budget. Of that money, $300,000 is designated for sewer rehabilitation, $200,000 for rear-loading garbage trucks, $25,000 for residential garbage cans, and $20,000 to put in limestone in the city’s sanitation yard in order to put the city’s wastewater trucks back in the yard. The trucks are currently housed at the wastewater treatment plant, Mayor Frank “Boo” Grizzaffi said.
Just because something is listed in the budget does not necessarily mean it will be funded this year, Grizzaffi said. The city chooses to buy or not to buy based on revenue, he said.
“If it looks like six months down the road, the revenue is not what we projected it to be, a lot of these projects don’t get done, which means at the end of the year we’re not going to finish in a deficit,” Grizzaffi said.
In 2012, the city issued $4 million in sales tax bonds and passed a three-tenths sales tax to use to work on the city’s main roadways.
The leftover revenue from that sales tax will be used on smaller road projects, Morgan City Chief Financial Officer Deborah Garber said.
The city plans to spend about $500,000 of that tax money this year on street and drainage work. Highway and street expenditures constitute 4.7 percent or $1.76 million of the city’s budget.
“We’re budgeting $500,000 for streets that we know are in disrepair that we’ll have to get to in the coming year, 2014. We don’t have a specific list, but we handle it on a worst first basis,” Grizzaffi said.
Before the three-tenths sales tax, the city only had about $80,000 from the parish for road repairs each year, Garber said.
Most of the city’s main roadways have been fixed, but the city still has major road problems on Levee Road, Railroad Avenue, Spruce Street, in addition to areas on Lawrence Street, Klingsville, and Marquis Manor among many other areas, Grizzaffi said.
It will take multiple years to get the areas that need roadwork done, Garber said. “I think we will very well spend that extra money every year,” she said.
The three-tenths sales tax lasts 12 years, but the city’s bond payment is only 10 years, Grizzaffi said. “The last two years, we might be having $800,000 or $900,000 a year for the next mayor to spend (on roads),” Grizzaffi said.
The money raised from the three-tenths sales tax can only be used for road repairs, Garber said.
Capital outlay projects take up 5.5 percent or about $2 million of the city’s budget. Of that money, $1.9 million is budgeted for a combination of state capital outlay funding to build three more cabins at Lake End Parkway, and grant money the city received for its wharf project to bulkhead the city’s riverfront, Grizzaffi said.
The police department’s budget is 10.4 percent or about $3.9 million of the total budget. The $300,000 increase in the police department’s budget came partly from a more than $100,000 increase in state retirement plan expenses, and about $50,000 in hospitalization expenses.
The fire department’s budget is 6.4 percent or about $2.3 million of the total budget. The fire department’s budget shows about a $100,000 increase in the fire department’s budget from the 2013 budget. The increase was mostly due to a roughly $80,000 jump in retirement and payroll taxes.
“For several years we had been hit with 3 or 4 percent increases a year in police and fire retirement systems, which is something we cannot control,” Garber said. City officials do not know what the retirement costs would be this year because the state determines how much the city has to fund, and that is not decided until July, Garber said. Therefore, city officials wanted to make sure enough was budgeted for those anticipated costs, she said.
Grizzaffi said the overall budget is “a very conservative presentation.” City officials “undershot” on the city’s projected revenues and “overshot” on its projected expenditures, he said.
The majority of the proposed 2014 budget is to pay for utility operation expenses at a cost of $20.2 million, which is a decrease of about $150,000 from the 2013 budget.
The city’s budget was prepared mostly by looking at the history of recurring expenses, Grizzaffi said. “All the extra stuff is whether or not we have the revenue to do it.”
The recreation, culture, and public programs budget is 7.1 percent or about $2.67 million of the city’s budget.
General government expenditures, which include administrative costs, make up 6.8 percent or slightly more than $2.5 million of the city’s budget. That is around a $90,000 increase from the 2013 budget.
The city expects to take in about $3.7 million in sales tax revenues and $1.8 million in property tax revenues to go into the city’s general fund budget. Overall, the 2014 budget plans for about $8.7 million in tax revenues, up more than $100,000 from the 2013 budget.
The city’s general fund budget is projected to be about $10.2 million, about a $300,000 increase from the 2013 budget.
The city will have a budget workshop in November where all the department heads and supervisors will discuss their proposed 2014 budgets, Garber said.