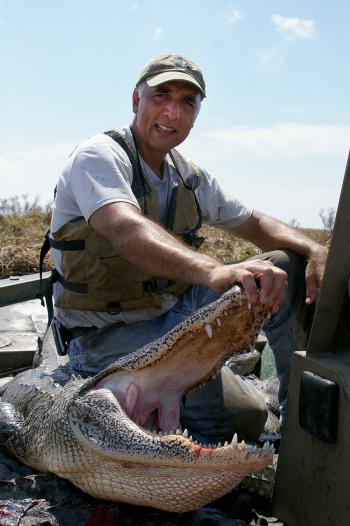 For an animal that was once on the brink of extinction, it’s hard to believe the State of Louisiana now has a wild alligator population estimated to be some two million and growing. That phenomenal figure doesn’t include a captive farm gator population that has been as high as another half million.
The remarkable comeback also has been an economic boon for a state more known as an energy and petrochemical producer. In 2013, 35,361 wild alligators harvested had a total skin value of $7.69 million dollars and another $5.69 million in meat value.
One only has to go to the Louisiana Department of Wildlife and Fisheries’ website and click on a link to “alligator program” to see these and other figures in a full report to the Louisiana Department of Natural Resources.
For the most part, since 1972 when the Louisiana Department of Wildlife Fisheries re-established a commercial wild harvest alligator season, only private and corporate landowners were issued tags. By utilizing and designating the alligator as a commercial renewable resource, the department, in effect, ensured through sustained use the American alligator would not only rebound in numbers but also be around for future generations.
Traditionally, private landowners or managers would hire trappers who leased trapping rights on vast acreages of Louisiana swamps and marshes for a percentage of harvest dollars when their gators were sold.
This past week, more than 2,000 licensed alligator hunters statewide took to the bayous and backwaters throughout the state to begin the 2015 wild alligator season.
What many people still don’t know or realize, according to Ed Mouton, Louisiana Department of Wildlife and Fisheries Biologist and Alligator Program manager, is some 349 resident hunters received lottery recreational alligator tags to hunt on public lakes and wildlife management areas throughout the state this year.
Mouton said, “There are still some people that don’t realize recreational tags are available. There was a big misconception that the public really didn’t have that opportunity to harvest an alligator. But, the program has been so successful and has been expanded to provide opportunity to the general public. In all, we advertised on 45 areas this year and provided opportunity for nearly 349 hunters to harvest 897 alligators.”
This weekend, yours truly will be heading down to the Atchafalaya Delta Wildlife Management Area with my spouse to try and fill three alligator tags. She was one of the lucky recipients who drew out for the coastal wildlife management area lottery this year. When the application process rolled around back in July, we both put in for the public lottery. The process was easy, and the applicant success rate was about 1 in 5.
“In some areas, the success rate is higher than others,” Mouton said. “It depends, really. We have the applicant success rate posted on the LDWF website. There are four coastal WMAs — the Atchafalaya Delta, Pass-A-Loutre, Pointe Aux Chenes and Salvador, plus one inland lake area north of Houma called Lake Boeuf.”
Drawing alligator tags doesn’t guarantee that the person fortunate enough to win this recreational lottery will actually fill them. There is some skill involved that the department does its best to educate first-time gator hunters on.
Mouton said, “Some people think that it’s very easy. They watch shows like Swamp People and others and think it’s a piece of cake and say, ‘I can do that,’ then go out and experience trying to set lines and have to deal with knocked down or pulled lines and just the habitat itself. Just navigating the waterways, they realize it’s no easy task.”
During my wife’s mandatory educational meeting required prior to signing for and picking up her tags, the department’s Lance Campbell reviewed the regulatory do’s and don’ts of the program on the wildlife management area.
In the process, Campbell also discussed how to properly and safely set a line for alligators.
Though probably not funny at the time for one recreational hunter who struggled on the coastal wildlife management area, nonetheless, come to find out, he was using a 4/0 bass fishing hook to catch his gators. Another first time gator hunter used too small of line that kept breaking when he did catch an animal.
Lines out on the wildlife management areas have to be marked with the hunter’s name. In the event alligator hunters are struggling, technicians and biologists on the refuge can assist the individual in what they are doing wrong by contacting them.
The department’s goals are to do all they can to ensure the recreational alligator hunter not only has the opportunity for a successful harvest but also does it in a humane and safe manner that doesn’t impact others who may be using the wildlife management area for other purposes.
In short, through education, it increases the chance for lottery alligator hunters to have a positive experience.
Prices for alligator hides are down slightly from 2013 and 2014. Prices, as of this week, look to bring hunters $28 per foot for 8-foot-and-above gators; 6-and-7-foot gators should fetch $20 per foot and 5-footers on down only will garner $10.
It’s too late to obtain recreational tags this year, but next year, you’ll want to pay close attention to the latest Louisiana Department of Wildlife and Fisheries website for announcements at the beginning of summer.
By JOHN K. FLORES
EDITOR’S NOTE: Flores is The Daily Review’s Outdoor Writer. If you wish to make a comment or have an anecdote, recipe or story you wish to share, you can contact him at 985-395-5586 or at gowiththeflo@cox.net or on Facebook at gowiththeflo outdoors.