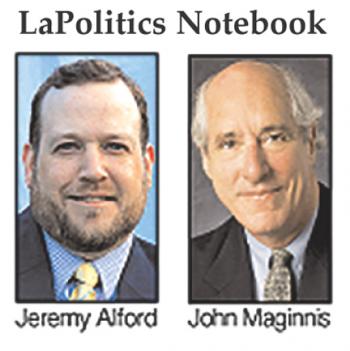 There’s a renewed sense of energy on this project and a plan is going to start coming together on how to best approach passenger rail by taking incremental steps.
BATON ROUGE, La. --

By JOHN MAGINNIS and JEREMY ALFORD
In making his transition from puncher to promoter, James Johnson of Shreveport thought it might help his situation to offer the Louisiana Boxing and Wrestling Commission a “large donation” to help move the licensing process along — and he did so in writing.
Based on records obtained by LaPolitics, the borderline bribe was made known to the commission at its April meeting, with Johnson, a former boxer, qualifying that it wasn’t really a bribe. In response, several members weighed in on the inappropriate nature of the whole thing.
According to the minutes of the meeting, commission member Dr. Thomas Ferguson of Houma said the incident “disturbed” him, which was verified by some of the board’s leadership in follow-up interviews.
“We had to jump on (Johnson) pretty good about that,” said Alvin J. Topham of Lake Charles, the current chairman. “You don’t bribe us to do anything.”
The commission, appointed entirely by the governor, did end up granting Johnson a promoter’s license, the same license he actually forfeited last month following talks with the commission’s attorney.
Despite the urging of commission members in April to “start off small,” Johnson organized a show in north Louisiana that appears to have fallen apart on the business side.
“We learned there were some money issues that were not taken care of and there will probably be lawsuits by these people who say he owes them money,” said Topham. “There were also some issues with the venue not being happy with how Johnson handled the ticket sales.”
While Johnson’s offer of a “large donation” didn’t stop the commission from approving his promoter’s license, the handling of his first event did prompt them to question whether he should maintain it in the future, thus his voluntary action. The commission, though, may not have heard the last of Johnson, who sources say is now considering applying for a matchmaker’s license.

Governor needs new member on BESE
The new president of the Louisiana Association of Business and Industry, Stephen Waguespack, officially stepped down from the Board of Elementary and Secondary Education before assuming his new role.
He was an at-large member appointed by Gov. Bobby Jindal.
“I really enjoyed it and thought it was a very rewarding experience,” Waguespack said.
Waguespack took over LABI nearly two weeks ago. He is currently touring parts of the state in an effort to meet with the organization’s members and will be making a local stop in the coming weeks.
In the meantime, Jindal is working to fill the spot on the education board and time is running short. Committees meet again Oct. 15, with the full board convening the following day.
The governor’s press office released a prepared statement saying, “We’ll be looking for a replacement to fill Stephen’s seat in short order.”

On the rail again
The Louisiana Intrastate Rail Compact was approved by the Legislature more than three years ago, during which time there’s been very little movement on the side of government, due largely to Baton Rouge Mayor Kip Holden taking his time to appoint members. The New Orleans City Council, for its part, immediately signed on and appointed members to the group that has been charged with exploring passenger rail between Red Stick and the Crescent City.
The good news is everyone’s finally onboard, including Ascension and Jefferson parishes. The first meeting of the compact was scheduled to take place this week in Gonzales and is expected to produce a strategic plan for moving forward.
“There’s a renewed sense of energy on this project and a plan is going to start coming together on how to best approach passenger rail by taking incremental steps,” said Rep. Walt Leger, D-New Orleans.
Sources say St. John the Baptist Parish could be the next to sign the compact and appoint members, although other locales between Baton Rouge and New Orleans are interested as well. Indeed, one of the challenges of the past three years has been the parishes in the middle. Informally there have been requests for multiple stops, which in turn could lessen the effectiveness of the proposed rail system.
Nonprofits in the two larger cities have kept the project alive and moving and have underwritten an ongoing study that will not only review possible stops, but also reveal the feasibility of adding service for the Louis Armstrong New Orleans International Airport.
It’s completely possible that the project would have been further along if Gov. Bobby Jindal hadn’t, four years ago this fall, rejected money from President Barack Obama’s administration to build a high-speed rail system between New Orleans and Baton Rouge. At the time, Jindal told Obama’s administration that Louisiana didn’t need the transportation funding because upkeep of the rail would eventually cost the state $18 million annually. But it was from the high-speed rail talk that the current passenger rail project was born.

They Said It
“I did implement blue jean Fridays.” — Stephen Waguespack, on one of his first decisions after taking over the presidency of the Louisiana Association of Business and Industry
“There’s no way I would criticize ‘Duck Dynasty.’ It’s one of the few programs I let my kids watch on TV. I’m proud to say those boys are from here.” — Gov. Bobby Jindal, during his opening remarks before the Louisiana Family Forum’s Legislative Awards Banquet last week
Find more information about John Maginnis and Jeremy Alford at www.LaPolitics.com or follow them on Twitter @LaPoliticsNow.