Hunter's fight with cerebral palsy one of inspiration 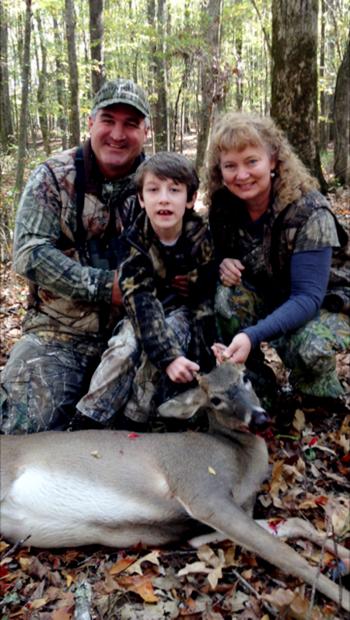 Twelve-year-old Jason Sanders killed his first buck this fall. A spike. The feat is not really that uncommon for the typical Mississippi kid who grew up in a hunting family. But, Jason is not your typical youth hunter. He is someone who has cerebral palsy.
Eighteenth century poet, Alexander Pope in his essay on man, “Hope Springs Eternal,” wrote:
“Hope springs eternal in the human breast;
“Man never is, but always to be blessed:
“The soul uneasy and confined from home,
“Rests and expatiates in a life to come.”
Born about a month premature, young Jason had some oxygen deficiencies at birth. What’s more, as time passed, his parents, began noticing some things weren’t quite right. They had two other boys and knew age-wise, what Jason should have been doing physically and verbally.
The concerned parents had an appointment with a neurologist scheduled, when hurricane Katrina hit the gulf coast.
Jason’s father, Dana Sanders, who works as a Wetland Consultant in Moss Point, Mississippi, says the family lost three months of their lives recovering from the ravages of the storm. Moreover, it wasn’t until afterwards they were finally able to reschedule the appointment where Jason was diagnosed with cerebral palsy.
The older Sanders expressed the diagnoses wasn’t something the couple was ready for, saying, “It wasn’t anything we had any knowledge of. But, what I did know was that word palsy kind of hit home, because I knew that was for life. It was something we weren’t going to get treatments for and be okay. I knew that it was going to be for a long time.”
Sanders says he tried to suck it up at first, but as time passed it started to sink in what was really happening and what the future might look like. He confessed he began struggling internally. That’s when Sanders drew upon his faith.
In that pinnacle moment Sanders says he got on his knees. His conversation with God, was candid, where he says he gave Jason to the Lord.
Sanders recounted his prayer that day saying, “I said, Lord! I need you and Jason’s your blessing to us. But, I can’t handle this. I need your help!”
Afterwards Sanders says he felt a peace of God that he couldn’t describe to anyone. What’s more, he felt like God had showed him the He had a plan for Jason’s life and would take care of him. All Sanders had to do was love him and be a dad to him.
In the subsequent years Dana and Adrian Sanders have accommodated Jason’s special needs, but haven’t changed their lifestyle as a hunting family.
“We didn’t let it slow us down and we do everything that we did before. But, what happened was our ‘normal,’ isn’t your normal. And, what we’ve had to do is adapt and adjust to make things work for Jason,” Sanders said.
Some of the things that the couple has done over the years is hunt more from tent-like popup ground blinds. They built him a special shooting chair. And, utilize a Bad Boy Buggy to transport him and equipment to and from the field, where over the years Jason has harvested several does off their family farm.
Over the years Jason had been invited to participate in youth hunts for disabled children sponsored by groups like “Trinity Outdoors,” “Wounded Warriors,” and” Hope Outdoors.” But, because Jason had access to his family’s farm and harvested deer before, his father felt he would be taking the place of a less fortunate child.
It wasn’t until a friend involved with Hope Outdoors convinced Sanders that the focus wasn’t on the hunt, but about ministry and encouraging other children with disabilities.
Sanders said, “He told me, ‘Man it isn’t about the hunting. It’s about ministry. There are little kids out there that go on these hunts that have the same afflictions Jason has, and they don’t have that look Jason does. And, there’s parents that you need to meet that live the same life you do. You need to network with these parents.’ He was right. We needed to do that.”
During Jason’s Hope Outdoors Hunt, is when he harvested his spike buck. What’s more, Sanders videoed the hunt and took pictures of his wife Adrian carrying Jason on her back more than a quarter mile to the blind.
Sanders posted the video to FACEBOOK and since, the hunt has received over 1.4 million views from around the world in places like England, Australia, South Africa and Canada besides the United States. Moreover, Sanders believes Jason indeed has been an inspiration and part of a greater plan God had for him.
Sanders said, “I have received several hundred personal messages on FACEBOOK – I’m not exaggerating. I’ve had people text me and say, ‘You know, I have CP and I appreciate it and I’m moved by this story.’ I’ve had people say, ‘My 2-year-old has CP and I didn’t know that was possible.’ Others just say, ‘I’m crying.’”
Sanders says he is glad Jason’s buck was a spike feeling had it been a monster buck the focus would have been the deer and not the message. He says nor does he want the focus on him as a father, but instead on Philippians 4:13, “I can do all things through Him who strengthens me.”
“It’s not me. It’s nothing I’ve done. I’m just blessed with an extraordinary little boy. And you know – I love him – and that should be normal,” Sanders said.