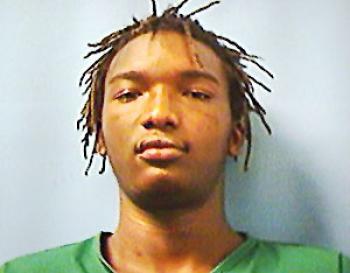 A fifth person was arrested Tuesday in connection with the stabbing death of a 23-year-old Bayou Vista man in October 2013, St. Mary Parish Sheriff Mark Hebert said in a news release.
Tyler Francis, 18, of the 300 block of Franklin Street in Morgan City, was arrested at 5:30 p.m. Tuesday for first-degree murder and possession of marijuana.
The murder warrant stems from an incident where Willie Francis, 23, of Bayou Vista, was found dead in a ditch on Oct. 30 in Berwick, Hebert said. During the investigation detectives of the St. Mary Parish Sheriff’s Office were able to link Tyler Francis to the crime scene and determined that Tyler Francis had taken an active part in the death of Willie Francis, the sheriff said.
At about 5:30 p.m. Tuesday detectives located Francis in Morgan City. He was stopped and placed under arrest. During the arrest, Francis was found to be in possession of a small bag of marijuana. Francis was jailed with no bail set. The investigation is still ongoing, Hebert said.
On Oct. 29, a sheriff’s deputy patrolling the Bayou Vista area located Willie Francis’ vehicle on U.S. 90 with the engine running. Concerned for his welfare because of the circumstances under which the vehicle was found, St. Mary Parish Sheriff’s detectives launched an investigation into Willie Francis’ whereabouts, the sheriff said in a news release at the time.
On Oct. 30, Berwick police received a phone call about the discovery of a body along La. 182.
The St. Mary Parish coroner identified the deceased as Willie Francis. According to the St. Mary Parish coroner, Francis sustained multiple stab wounds, Hebert said.
Kaysha Francis, 16, of Bayou Vista, and her boyfriend Kirkland Craft, 22, of Morgan City, were indicted Dec. 5 on first-degree murder for their roles in the stabbing death of Willie Francis.
Two other suspects had also been arrested in the case after being of accused of having knowledge of the crime and not reporting it. On Nov. 6, Priscilla Francis, 41, and Autumn Alfred, 24, both of Bayou Vista, were arrested for accessory to second-degree murder. Priscilla Francis is Kaysha Francis’ mother.
Kaysha Francis told police two knives and a “flip flop type footwear” found at the scene belonged to her, according to an affidavit. She had “recently been hospitalized for a stab wound at Women and Children’s Hospital in Lafayette,” the affidavit said.
The morning after Kaysha Francis’ arrest, Craft was arrested by Morgan City police on warrants for theft and failure to appear. He was picked up from the Lafayette Police Department and was transferred to the sheriff’s office on the second-degree murder charge.
Craft told investigators that he stabbed the victim about 10 times, on the front and back sides “in defense of his juvenile girlfriend,” an affidavit stated.