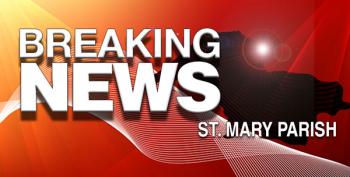 Patterson, La.
By ZACHARY FITZGERALD
zfitzgerald@daily-review.com
A 54-year-old Franklin man, who had been featured in September’s Daily Review Most Wanted edition, was arrested Monday on a warrant for second degree battery, Patterson Police Chief Patrick LaSalle said in a news release.
Roy L. Clements, 54, of the 100 block of Mendoza Lane in Franklin, turned himself in at the Patterson Police Department at 12:20 p.m. Monday. Clements was released on $2,500 bail.
Clements was wanted for second degree battery stemming from an Aug. 8 incident. Patterson police were sent to Patterson State Bank for a complaint of a female who had been beaten up and was in the area of the bank.
Officers noticed a female who stated that Clements had beaten her, LaSalle said. The female had signs of having been beaten on her face and her teeth had been broken during the altercation, according to LaSalle.