Bergeron is headed to Louisiana College for softball 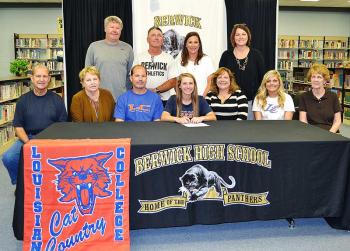 Berwick High School softball player Shelby Bergeron didn’t mince words when describing her experience with softball as youngster.
“Growing up, playing it, I was terrible,” she said.
However, Bergeron said she learned to love the sport and through hard work with it, she worked herself into a college prospect.
She has parlayed her talents into a chance to play at Louisiana College in Pineville where she will head next year.
Bergeron held a signing ceremony Tuesday in Berwick High School’s library for the occasion.
With all the hard work she has put in, she said it makes continuing her career on the college level more special.
“It makes this moment feel so much more worth it because I know I really did work for it, and I’m so excited to be able to get the opportunity to go play softball at a collegiate level,” she said.
Bergeron is not the only one who has noticed her hard work through the years
“She’s a self-made ball player,” Berwick High School head softball coach Lloyd Burchfield said. “She’s a student of the game. She studies the game. She listens to everything you say, and if there’s an example of somebody who’s made themselves into a ballplayer …. it’s Shelby Bergeron.”
Bergeron said the wheels started turning about a college softball career after members of her travel softball organization, Louisiana Pride, told her she needed to pursue it beyond high school.
She said she considered it but soon fell in love more and more with the game.
“I knew the more and more I played it, the more and more I loved it, and I didn’t want to stop,” she said.
Besides Louisiana College, Bergeron said she also considered a future at the University of Dallas.
“I just realized it was too far away, and (Louisiana College) was really nice,” she said.
Bergeron, who has been playing for Louisiana Pride since her sophomore year, said she has been playing outfield for them since her junior year.
On the collegiate level, she said she would be an outfielder and likely would play in the middle infield, too.