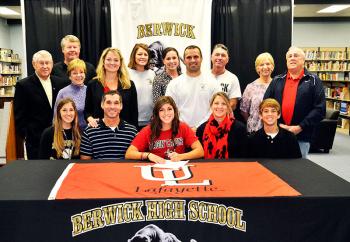 They have a really good program over there, really good coaches, and I went there for a visit and I looked around and I felt right at home, just like I do at Berwick, so it was a no-brainer.
Berwick, La.
By GEOFF STOUTE gstoute@daily-review.com

Berwick High School softball standout Shannon Theriot said she always has been a fan of the University of Louisiana at Lafayette’s softball program.
Her visit to the school further validated her support for the school.
On Wednesday, she made things official as she signed a national letter of intent to continue her playing career at the Louisiana national power.
“They have a really good program over there, really good coaches, and I went there for a visit and I looked around and I felt right at home, just like I do at Berwick, so it was a no-brainer,” Theriot said in the school’s library Wednesday.
She said she liked the team and what the team does is similar to what Berwick’s softball team does.
“It was an awesome decision, and I took it,” she said.
Being close to home, she agreed, was an added benefit.
“All my friends can and my family can come. … It’ll be great to have everyone there and to support,” Theriot said.
Theriot is one of six players who signed with ULL Wednesday, joining fellow Louisiana prep players Summer Ellyson of Teurlings Catholic, Kara Gremillion of St. Amant, Chelsea Lotief of Ascension Episcopal School, and Texas’ Brittany Nollkamper and Beth Ashley, according to a ULL release.
“This is a special group of kids who truly understand the significance of the history, tradition and value of this program,” ULL coach Michael Lotief said in a news release. “They are competitors, winners and high achievers in the classroom and on the field. Congratulations and welcome to the Ragin’ Cajuns sisterhood.”
Theriot, a 5-foot, 3-inch outfielder, has earned All-State recognition two out of her first three years in high school — honorable mention status as a freshman at Morgan City High School and first-team a year ago at Berwick High School as a utility selection after hitting .604, while facing some of the top teams in the state.
Theriot, a slap hitter, also was named the District 9-3A Most Valuable Player after batting .739 in district.
At ULL, she also will continue a family tradition of athletes as her uncle, Brian Theriot, played tennis and her great-grandfather, Clifton Theriot, played football, track and field, basketball and baseball and is a member of the university’s Athletic Hall of Fame.
For Theriot, she said the coaches have told her to come in prepared as if you are a starter, “because that’s the mindset you’re supposed to have at ULL and college softball.”
She said she would like to play in centerfield, though.
“I actually talked to a lot of the slappers who also play outfield, so it’s (going to) be very competitive, and I think it’ll push me past my limits and it’ll really help me be a better player overall,” she said.
Berwick coach Lloyd Burchfield said Theriot has two things coaches seek in players in that she can run well and has a good arm.
“I think college coaches pretty much feel like if you got those two tools, they can teach you how to do the rest of the stuff, because Shannon Theriot has an uncanny ability to run down a fly ball,” Burchfield said. “She makes a good read on it. Her first step is always right, her angle is always right. She’s (a) tremendous defensive player, but she’s also an offensive weapon and you got to be pretty good if you’re going to sign with a perennial top 10 team.”
He said her running ability and arm set her apart from the other Division 1 softball signees Burchfield has seen move on from his program.