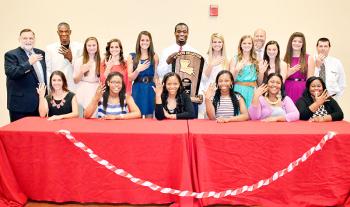 We’ve been talking about getting a ring since my eighth grade year so to finally be here and finally get presented with the rings, it’s just a great feeling.
Morgan City, La.
By GEOFF STOUTE gstoute@daily-review.com

The Central Catholic Lady Eagles capped their celebration of their 2014 Class 1A state basketball title with an awards ceremony Wednesday in which the squad also was presented their state championship rings.
Eighteen rings were given out — one to each member of the team as well as coaching staff and other personnel, trainer Larry D’Antoni and Central Catholic Athletics Director Ree Case and Principal Vic Bonnaffee.
The rings have the Central Catholic logo in red with a few stones and are framed by the words State Champions.
On one side is the state of Louisiana with #1, while on the other side is their name and position.
“We’ve been talking about getting a ring since my eighth grade year so to finally be here and finally get presented with the rings, it’s just a great feeling,” said Central Catholic senior Meo Knight, who is headed for the University of Alabama to continue her hoops career next year.
Fellow senior Randi Brown, who recently signed with the University of New Orleans to continue her basketball career, said the ring is special for the younger players on the team but also has a lot of meaning for the seniors.
“We’ve been looking forward to it ever since we won,” she said.
While the ring ceremony is the end of the celebration for this year’s squad, Central Catholic coach Jamarr Garrett said he doesn’t think his squad realized the magnitude of their accomplishment.
“I don’t think still to this day, they don’t realize what they have done,” he said. “You just won the first state championship in basketball for your school. That’s something to be proud of.”
Knight said while the rings and trophy are special, they are just part of the celebration from this year.
“The trophy and the ring, they’re just symbols, but the feeling that we had when we won the state championship, we’ll never forget that.”
In addition to the rings, each member of the team was given a plaque for making the state championship game, while individual awards also were given out.
The squad finished its season with a 29-3 mark, including a perfect 12-0 mark in District 7-1A action. The team defeated North Central, 67-64, for the Class 1A state championship at Burton Coliseum in Lake Charles in March.
Below is a list of the individual awards given: