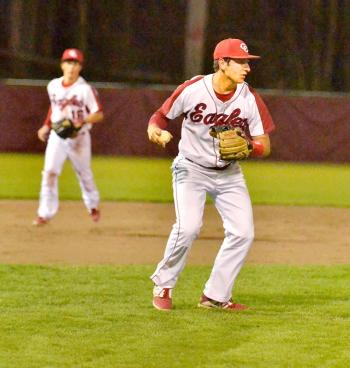 When you play defense and throw strikes, you give yourself an opportunity to win.
Amelia, La.

Central Catholic responded from its run-rule loss Tuesday with a run-rule of its own on Thursday with an 11-1 victory against the Ellender Patriots in opening day action at the Central Catholic tournament.
Central Catholic scored in every inning, taking a 4-1 lead after two inning, before adding a combined seven runs in the final three frames, including four in the bottom of the fifth to end the ball game.
Charlie Barron earned the win for the Eagles. In five innings, he surrendered an earned run on three hits with three walks, fanned six and hit a batter.
He also led the Eagles at the plate where he finished 2-for-2 with a double, four RBIs and two runs.
Other top contributors included Samuel Guarisco, 1-for-2, two RBIs and a run; Sage Thibodaux, 1-for-1, an RBI, a run and a stolen base; Barron Courtney, 1-for-3, an RBI and a run; and Bryson Barbier, 1-for-3, and an RBI.
Even in the dominate win, Central Catholic still left eight runners on base.
The Eagles (6-1) will return to action today when they play Houma Christian at 5:30 p.m.
Patterson knocks off
unbeaten Carencro
The Patterson Lumberjacks used a big third inning to knock off unbeaten Carencro, 6-4, in opening day action at Central Catholic’s tournament.
While Patterson fell behind 2-0 entering its at bat in the bottom of the third, the Lumberjacks scored six runs in the frame, utilizing Carencro errors to get back in the ball game and take a 6-2 lead following the inning.
Carencro scored two more runs in the fifth but could get no closer.
“When you play defense and throw strikes, you give yourself an opportunity to win,” Patterson coach Ryan Jensen said. “That is the point I have been trying to make our guys understand all season. Tonight was a perfect example. Their pitcher dominated us except for the (one) inning we were able to put together a few good swings and they misplayed a few balls. We were able to come up with the clutch hit that has avoided us for much of the season.”
While Patterson had clutch hits, they didn’t have many as a team as the squad was outhit 8-3 in the contest.
Charles finished 1-for-3 with a double, an RBI and a run to lead the squad.
He also earned the victory on the mound. In 4.1 innings, he surrendered four earned runs on eight hits with three walks and fanned two.
Jake Lagrange earned the save for the Lumberjacks. In 2.2 innings of relief, he walked one and fanned seven.
“This game was won by our pitchers and our ability to make routine plays,” Jensen said. “Sirbatian battled for us out there, and we made some plays to get out of a few jams. And then Jake came in and really had great stuff. That is the best I’ve seen Jake throw since he has been here. It was a good team win that we were excited to get.”
Other top offensive contributors for the Lumberjacks included Taylor Harris, 1-for-3, an RBI and a run; Kenny Singleton, an RBI and a run; and Tyrik Singleton and Jamey Fabre, an RBI apiece.
Patterson (6-3) will return to action today when it plays Central Lafourche at 7:45 p.m.