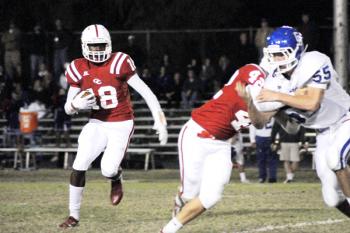 We were able to capitalize on most of them for points.
By ZACHARY FITZGERALD zfitzgerald@daily-review.com

Five forced turnovers, four of which led to Central Catholic scoring drives, were key in the Eagles’ 34-21 upset homecoming win Friday against the Metairie Park Country Day Cajuns.
Coming into the game, Country Day was ranked No. 7 in the Louisiana Sportswriters’ Association Prep Football polls while Central Catholic was unranked.
But according to Louisiana High School Athletic Association Division IV power rankings, which determine playoff seedings, Central Catholic was ranked No. 3 while Country Day was ranked No. 7.
In Friday’s contest, Country Day lost a fumble on its own 34-yard line on the first offensive play of the game to set up a Central Catholic scoring drive, capped by a Samarick Paul 13-yard touchdown run with 10:11 remaining in the first quarter.
The Eagles took advantage of another Cajun turnover, this time an interception by Charlie Barron at the Eagles 22-yard line. Central Catholic drove down the field and scored on a 12-play drive that ended with a 10-yard touchdown run by Chris Singleton.
On the Cajuns’ next possession, Barron intercepted another pass, which he returned 37 yards to Country Day’s 28-yard line. Once again, the Eagles took advantage of another turnover and scored on a 10-yard Stefano Guarisco touchdown run with 11:55 remaining in the second quarter to give Central Catholic a 21-0 lead.
However, Country Day responded with two touchdowns in the second quarter, first scoring on an 8-yard touchdown pass to Trey Harrell from Morgan Farrell with 6:46 left in the first half.
The Cajuns would score again just before halftime on a 40-yard pass to Jase Griffin from Farrell with 25 seconds left in the half to bring the score to 21-14.
On the opening drive of the third quarter, Central Catholic marched 57 yards and scored on a 4-yard run by Paul while taking five minutes off the clock to give the Eagles a 27-14 lead after a missed extra point.
The Cajuns turned the ball over for the fourth time on a fumble by Griffin in the third quarter. That turnover led to another Central Catholic scoring drive, ending on a 1-yard touchdown run by Guarisco with 11:01 left in the fourth quarter to extend the Eagles’ lead to 34-14.
Country Day was not finished, though, as the Cajuns made the most of a fumble recovery when they scored on a 28-yard touchdown pass to Simmons from Farrell with 9:09 to play in the game, narrowing the Central Catholic lead to 34-21.
However, the Cajuns couldn’t get anything else going offensively the rest of the game, turning the ball over on downs on its final two possessions.
Central Catholic coach Tommy Minton said the Eagles’ five forced turnovers were critical in the game.
“We were able to capitalize on most of them for points,” Minton said.
From watching tapes on Country Day, the Cajuns do not usually turn the ball over often, Minton said.
“I thought our defense did a great job,” Minton said.
“They’re good,” Metairie Park Country Day coach Richard Wood said of the Eagles.
The Cajuns made too many mistakes, Wood said.
“We played tit for tat for a while, but they had one more answer than we had,” Wood said.
Central Catholic went back to a 1940s-style single-wing offense without starting quarterback Blake Byrne in the game, Minton said.
“We went to a little single-wing type attack and used Stefano as a quarterback that would run the ball,” Minton said. “And we still used some play-action fakes.”
Guarisco ran the ball 37 times for 156 yards and two touchdowns and was 4-for-6 passing for 31 yards.
Minton said he thought Central Catholic’s offensive line did a good job and gave the team some running room. The Eagles also made some plays when they passed the ball, Minton said.
The Cajuns (7-2) play Houma Christian this week and have to take care of business there in order to win the district championship, Wood said. Not making mistakes, including penalties, is the biggest thing Country Day can learn from Friday’s game, Wood said.
The Cajuns were penalized seven times for 62 yards while the Eagles had five penalties for 53 yards.
The Eagles (7-2) will finish the regular season this week with a District 7-1A contest against Gueydan.
Central Catholic’s win against the Cajuns should solidify the Eagles’ chance at a good home game in the first round of the Division IV playoffs, Minton said.