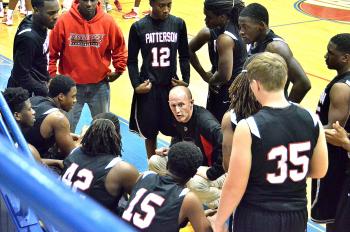 Like I just told the guys just now, when we went up by 1 and they took that shot and missed it, I was like just get the rebound.
Houma, La.
By GEOFF STOUTE gstoute@daily-review.com

Ellender Memorial’s gym is nicknamed “The House of Pain.”
Patterson High School certainly felt the pain, but it was more self-inflicted rather than imposed upon as the Lumberjacks could not overcome their own miscues in a 61-56 loss to Ellender Tuesday in non-district action.
After taking a 21-12 lead into the second quarter, the Lumberjacks were outscored 20-4 in the second period and realistically, never recovered until late in the third quarter when they trimmed what was once a 12-point deficit to six at 46-40 entering the fourth quarter.
The Class 3A ’Jacks continued to rally in the fourth quarter, taking the lead for the first time since the second quarter on a Daylon Charlot basket off an assist from Nehemiah Augustus with 1:14 remaining for a 56-55 lead.
However, Ellender scored on a put back on the other end and closed the game out with free throws, while Patterson (8-2) turned the ball over on a traveling violation, missed a layup and could not connect on a few other shots as it fell for the just the second time this season, snapping a four-game winning streak.
“Like I just told the guys just now, when we went up by 1 and they took that shot and missed it, I was like just get the rebound,” Patterson coach Ryan Taylor said. “If we get the rebound, we give ourselves a chance. But not only did we not get that rebound but we didn’t get the next either. They’re too athletic, too good of a team to give them three or four chances to think they’re not going to make a shot.”
Ellender coach Cornell Scott said he expected Patterson to make a run and credited his squad for matching Patterson’s late game surge.
“A couple of miscues and that ball can bounce either way,” he said. “We pride ourselves on being able to finish in the fourth quarter. Finish shots, finish layups, finish jump shots, finish free throws with our conditioning.”
For much of the game, Patterson had trouble connecting on high percentage shots near the basket.
They also were done in by turnovers.
Still, the Lumberjacks didn’t let the game get away from them.
Patterson actually led 2-0 before the game even began. Ellender was assessed a team technical foul for not having its starters marked in the score book, and Patterson took the 2-0 lead after Jedrick Gunner sank two free throws.
The ’Jacks took the momentum from there, taking as much as a 21-9 lead late in the first quarter on D.J. Jones’ bucket late.
Ellender’s Curtis Anderson beat the buzzer with a 3-pointer to cut the deficit to 21-12 after one quarter.
While Patterson’s shooting was hot to begin the game, it cooled off in the second period as the squad was limited to just one field goal, a bucket by Augustus, and one free throw each by Taylan Grogan and Jones.
Ellender, meanwhile, started the quarter with a combination of two 3-pointers and several easy lay-ins to work its way back in the game.
Leland Alexander’s bucket after a teammate found him in the paint gave Ellender its first lead with about 5:32 remaining in the first half.
The Patriots would continue to extend their lead, heading into halftime with a 32-25 advantage.
While Taylor credited Ellender with keeping their pace of play up in the second quarter, he said his team had chances.
“We had the shots,” he said. “We missed three shots for sure from block that we normally make, and you gotta make and then other possessions we rushed shots, which is just part of the game when you play Ellender. If you don’t control yourself and take good shots, as soon as you miss it, it’s a layup.”
Scott said his team coming back was a matter of adjusting to how the referees were calling the game.
“Once I felt like they adjusted, we were able to settle down a little bit,” Scott said. “But Patterson’s a good team, good, strong physical (team). … Once we figured out how to play defense without fouling, then I think we did a lot better.”
In the second half, things looked about the same as Ellender opened up as much as a 44-32 advantage in the third quarter.
However, two free throws by Augustus sparked an 8-2 run to close out the frame for the Lumberjacks.
In the final period, Patterson continued to cut into the lead as Grogan’s 3-point bucket late cut Patterson’s deficit to 52-51.
While Ellender countered with a 3-pointer by Alexander on its next possession, Patterson cut the lead to one again at 55-54 following Gunner’s steal and assist to Augustus for the basket. Charlot’s bucket gave the ’Jacks the lead at 56-55 with 1:14 remaining.
Despite the tough loss, Taylor said the game was a good preparation for his squad looking toward the postseason.
“It just made us better,” he said. “Yeah, we might have come out short on the score board but in the long run, we’re going to be fine. We’re going to be OK.”
Augustus led Patterson with 14 points, while Charlot scored nine; Gunner, eight; and Benjamin and Grogan, seven each.
Patterson will return to action Friday when it hosts Morgan City in nondistrict play.