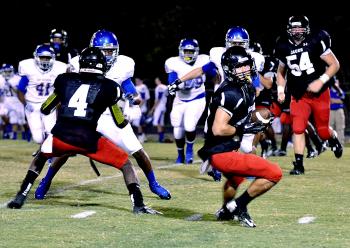 A big key for us is to remain turnover free on offense again this week.
Patterson, La.
At Baton Rouge

By CORWIN MURRAY
Patterson travels to Baton Rouge looking for its fourth win in a row Friday.
The Lumberjacks will tangle with Southern Lab at La. Leadership’s Doug Williams Stadium.
Kickoff has been changed from 7:30 to 7 p.m.
The Lumberjacks come into the game following a 40-34 win against Westlake in which the teams combined for nearly 1,000 yards of total offense.
Patterson was led by quarterback Spencer Landry, who completed 13-of-40 passes for 273 yards with three touchdowns and two interceptions.
For the season, Landry has completed 90-of-169 passes for 1,468 yards with 16 touchdowns and eight interceptions. His passing yardage is good enough for third best in the state among quarterbacks in all classes.
Daylon Charlot was the team’s top receiver with six catches for 146 yards and two touchdowns. Rene Maillet had four receptions for 65 yards and a score, while Mykel Jones had two catches for 43 yards. Jones was limited by an ankle injury in the game.
“He worked hard in rehab this week, and he looked good today (Wednesday) in practice so he will go Friday,” Patterson head coach Tommy Minton said.
Jones has 30 catches for 557 yards and seven touchdowns through five weeks while Charlot has 24 grabs for 419 yards with seven scores. Maillet has eight receptions for 133 yards with a score and Jedrick Gunner has 10 catches for 129 yards.
Jones’ receiving yardage ranks sixth among all receivers statewide.
Patterson (3-2) also got the running game going last week, rushing for nearly 200 yards.
Tristen Ausama was the team’s leading rusher with 14 carries for 93 yards and a touchdown.
“We want to be more balanced now,” Minton said. “We had to throw the ball a lot early, but we plan on being more balanced for the remainder of the season.”
Ausama has carried 37 times for 173 yards and a score. Deontay Jones had 61 yards on 14 carries and a touchdown Friday, and he’s carried 35 times for 166 yards and three scores this season. Larry Turner has gained 124 yards on 21 carries with a touchdown, while Mykel Jones has eight carries for 108 yards and a score.
“A big key for us is to remain turnover free on offense again this week,” Minton said.
Patterson’s defense rose in the fourth quarter last week, led by linebacker Nehemiah Augustus. The sophomore blocked a Westlake punt and scored to tie the game at 34.
Augustus had two sacks for the second week in a row.
“He’s a man,” Minton said following the game. “When he makes up his mind, he’s hard to stop. I’m just glad I have him for two more years.”
Patterson’s defensive stand continued when Turner, playing with an injured hand, made a one-handed interception.
Shelby Lavergne got into the act as well with a pick.
Patterson capitalized on the turnover, scoring the winning touchdown with 1:28 to play when Landry hit Maillet for a 7-yard score.
The Lumberjacks’ opponent this week, Southern Lab (0-5), lost to Plaquemine 49-28 a week ago.
“They have played a brutal schedule for a 1A team,” Minton said. “They have played an all 3A and 4A non district schedule and most were ranked.”
Southern Lab’s schedule has included University Lab, currently Class 3A’s top-ranked squad; Plaquemine, who is ranked fifth in Class 4A this week; and Amite and St. Charles, who both are receiving votes in this week’s Class 3A poll. The Kittens also played Donaldsonville, who compete in Patterson’s district this season.
In last week’s loss, Southern Lab trailed by more than 36 points in the third quarter but responded with two touchdowns. Quarterback Bladrick Veal connected with Tevis Abraham for a 7-yard touchdown for the first score, while Veal hooked up with Veal on a 14-yard touchdown pass on the next scoring drive to cut the deficit to 42-20.
“They have good skill people at wide receiver and the quarterback is very talented,” Minton said. “They also have good size on the O-line and D-line but they are very young. Several of them are sophomores.”
Additional reporting by Sports Editor Geoff Stoute as well as www.theadvocate.com and www.nola.com.