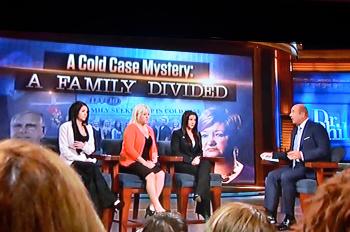 Sisters Denise Bailey, Amy Lemoine Perkins and Bernadette Lemoine accused their mother, Ellen Lemoine, and brother, Shawn Lemoine, of having knowledge of or possibly a hand in their father’s death during an episode of “Dr. Phil.” A polygraph on the show stated there was no deception involved. (The Daily Review Photo by Courtney Darce)

During 2013, the family of Glenn Lemoine, the Patterson man who was found dead in the Charenton Canal in 2010, had his body exhumed, a second autopsy performed, and went on “Dr. Phil” to discuss the events that tore the family apart.
In January, his family had his body exhumed and brought to Alabama to have a second autopsy performed by board certified pathologist Dr. Adel Shaker. Shaker ruled the manner of death a homicide and cause of death violence of undetermined means. One of Lemoine’s daughters, Denise Bailey, provided the autopsy report to The Daily Review.
The 60-year-old Lemoine of Patterson left behind 11 children.
Lemoine’s manner of death and cause of death were originally ruled undetermined by St. Mary Parish Coroner Dr. F.H. Metz after the autopsy was performed in Jefferson Parish. Metz stands by his finding of undetermined cause and manner of death.
Lemoine’s body was found in the Charenton Canal Aug. 9, 2010, two days after his abandoned car was found in a ditch on U.S. 90 East near the casino. He was last seen leaving Cypress Bayou Casino shortly after 3:30 a.m. Aug. 7, 2010.
In October, the family went on “Dr. Phil” with family members accusing other family members of having involvement in Lemoine’s death.
Three of Lemoine’s daughters accused their mother and brother of knowledge pertaining to Lemoine’s death.
Sisters Denise Bailey, Amy Lemoine Perkins and Bernadette Lemoine accused their mother, Ellen Lemoine, and brother, Shawn Lemoine, of having knowledge of or possibly a hand in their father’s death. The children repeatedly blamed their mother’s need for money as the reason they believed her to be responsible in some way.
Shawn Lemoine said his father’s hand was missing. Coroner’s reports indicated there was no water in his lungs, indicating he was deceased before he went into the water.
A polygraph test on the family members found no deception about their knowledge of Glenn Lemoine’s death.
Family members paid $10,000 to have a microscopic examination and second autopsy performed, Bailey said. “In our hearts, we knew something happened to him from the beginning,” she said in April.