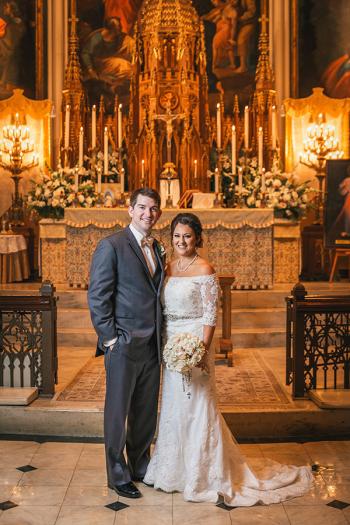 Taylor Louise Adams and Simon Charles Gottung were united in matrimony April 8 during a 6:30 p.m. double-ring ceremony at St. Patrick’s Church in New Orleans. Monsignor Douglas Courville officiated.
The bride is the daughter of Ronny and Penny Adams of Bayou Vista. She is the granddaughter of Patricia Kiffe of Bayou Vista, the late Whalen Kiffe, and the late Herbert and Mary Louise Adams.
The groom is the son of Paul and Pat Gottung of Katy, Texas. He is the grandson of William Gottung of Albany, New York, the late Frederick and Norine Waguespack, and the late Phyllis Gottung.
Music for the ceremony was by organist Andrew Mills and vocalists Amy Gottung and Christoper Warwick. Greeters were Hank Percle and Rex Foti.
Ceremonial readers were Michelle Kyle and Mark Gottung. Kristi Carriere and Elizabeth Foti were gift bearers.
Escorted in marriage by her father, the bride was attired in a lace A-line, fitted gown of ivory and white. The sweetheart neckline held eyelash trim. Beads, sequins and pearls embellished the gown. Her bolero jacket of scalloped lace adorned with beads and pearls was worn off the shoulder and was elbow length. She completed her ensemble with a pearl necklace and bracelet given to her by the groom, and pearl earrings belonging to her grandmother Patricia Kiffe.
Gracing her head was a fingertip-length veil embellished with beads and pearls.
She carried a bouquet of white hydrangeas and peonies, and blush-colored roses and berries. Completing the bouquet was a rosary in memory of her grandfather, the late Whalen Kiffe, and a chaplet in memory of the late Miles Liner.
Megan Sampey was maid of honor. She wore a blush sleeveless, fitted dress that was floor length featuring a lace overlay. She carried a bouquet of white hydrangeas with blush-colored berries.
Bridesmaids were Kristin Percle, Brittani Richard, Allie Matte, Allison Russo, Kaitlin Kates and Paige Boudreaux. Sydney Grace Sampey was junior bridesmaid.
Ellie Kate Percle was flower girl and Hollis Foti was ringbearer.
Serving as best man was Denton Gottung. Groomsmen were Forrest Foti, Anthony Cannata, Corey Dauterive, Lindell Adams, Robert Sampey and Jordan Samuelson. Maddox Sampey was junior groomsman.
Ushers were Derek Carriere, Joe Berardi and Damon Uherek.
A reception followed at the Security Center Federal Ballroom in New Orleans.
The brides table held a four-tiered white cake with a signature filling of pineapple. The layers were accented with fleur de lis and real flowers. A large ‘G’ topped the confection.
The groom’s cake depicted a boiling pot with all the fixings. Adorning the groom’s table was a canvas print of the bride and their pet Rusty Dog.
Guest tables were adorned with centerpieces of candles and floral arrangements.
The bride graduated from Berwick High School, Lady of the Lake College in Baton Rouge and San Jacinto College in Texas. She is a registered diagnostic medical sonographer.
The groom graduated from Fontainebleau High School, and Southeastern University in Hammond with a bachelor’s degree in finance.
They honeymooned in Saint Lucia and reside in Houston.
Prior to the wedding, a rehearsal dinner was hosted by the groom’s parents at Cochun in New Orleans.