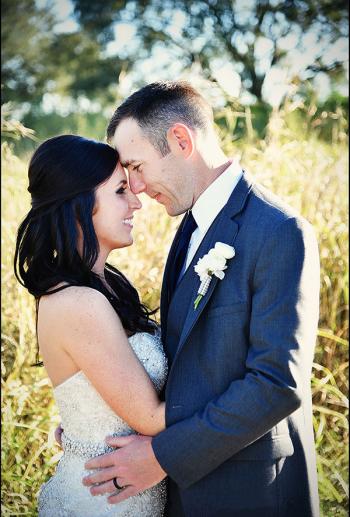 Sarah Michelle Diesi and Marvin Earl Ellis Jr. were united in holy matrimony on Oct. 22 at Cathedral of St. John the Evangelist in Lafayette. The Rev. Chester Arceneaux and Deacon Sammy Diesi, uncle of the bride, were celebrants.
The bride is the daughter of Michelle Bellard Hanks and her stepfather Bryan J. Hanks of Lafayette, and the late Cyril Diesi II. She is the granddaughter of Carl Hanks of Lafayette, the late Carl and Ethel Bellard, and the late J.C. and Bernice Diesi.
The groom is the son of Marvin Ellis Sr. and Danette Clements Ellis of Bayou L’Ourse. His grandparents are Gerald and Martha Clements of Bayou L’Ourse, the late Marvin L. Ellis and the late Bessie P. Ellis.
Jennifer Bellard, godmother of the bride, and Audrey Adams, aunt of the groom, presented scripture readings.
Escorted in marriage by her stepfather, the bride chose a structured bodice gown with a sweetheart neckline, a tulle and chiffon train. Enhancing her gown was a fully-beaded belt.
Gracing her head was a white-ivory beaded cathedral length veil.
She carried a bouquet of silver brooches with white silk roses handmade by Paige LaVergne. The bouquet was completed with the bride’s rosary given to her by her mother.
LaVergne served as matron of honor. Bridesmaids were Brooke Folse, Ashley Baker, Megan Guillory, Chelsey Dugas, Jayci Cormier, Jeri Ann Hughes and Heidi Bellard Hollingsworth, cousin of the bride.
They each wore a floor-length gown of midnight navy and carried white bouquets of hydrangeas, roses and peonies.
Elizabeth Hollings-worth, godchild of the bride, served as flower girl.
The groom’s father was best man. Groomsmen were Bryce Clements, brother of the groom; Gary Ellis Jr. and Shaye Toups, cousins of the groom; Trey Olwell, nephew of the groom; Shane Cook and Lance Diesi, brother of the bride.
Ringbearer was William Hollingsworth, cousin of the bride.
Ushers were Jared Bellard, cousin of the bride, and Michael Bellard, uncle of the bride.
A reception followed at LePavillion at Parc Lafayette.
Prior to the wedding, a rehearsal dinner given by the groom’s parents was held at Home 2 Suites by Hilton at Parc Lafayette.
The bride is a graduate of Acadiana High School and the University of Louisiana at Lafayette where she earned a bachelor’s degree in child and family studies. She also earned a master’s degree in social work at Louisiana State University.
The groom graduated from Berwick High School. He is employed in the oil and gas industry.
The newlyweds will reside in Lafayette.