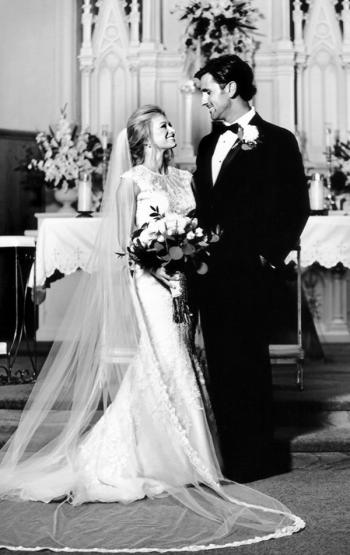 Alli Lynne Landry and Bradley Paul Matte were united in matrimony May 20 at Sacred Heart Catholic Church in Morgan City. Monsignor Douglas Courville officiated.
The bride is the daughter of Mr. and Mrs. Michael J. Landry Jr. of Bayou Vista and Mr. and Mrs. Carl M. Kleinpeter of Port Allen. She is the granddaughter of Mr. and Mrs. Kenneth Zimmer of Bayou Vista, Faye Ramirez of Baton Rouge, Michael Landry Sr. of Patterson and the late Linda Landry and Robert Kleinpeter.
The groom is the son of Mr. and Mrs. Brad J. Matte of Morgan City. He is the grandson of Mrs. Warren S. Orlando and Mrs. Joseph L. Matte of Morgan City and the late Warren S. Orlando Sr. and Gloria and Joseph L. Matte.
For the wedding, the church altar was decorated with large floral arrangements of white and ivory gladiolus, lilies, roses and greenery designed and created by the bride’s grandmother, Mynette Zimmer.
Music for the ceremony was by organist Lee LeBlanc, trumpeter Ian Bergeron and vocalist Abbie Paradee.
Readers were Tim Hymel, uncle of the groom; Leah Reppel, cousin of the bride and Stephanie Kleinpeter, sister-in-law of the bride. Offertory gifts were presented by Lynne Duay and Debra Hymel, godmothers of the bride and groom. Eucharistic minister was Dr. Robert P. Blereau.
The bride, escorted in marriage by her fathers, wore an ivory Alencon lace trumpet-style gown with a tiffany-length train. The antique-satin lined gown had a hand-beaded and jeweled neckline of Swarovski crystals and seed pearls, and a self-sash belt at the waist with a beaded center. The lace and sheer illusion back included cascading pearl buttons down the center.
Gracing her head was a cathedral-length veil of ivory illusion with an Alencon lace border.
She carried a bouquet of white and ivory peonies, roses, freesia, eucalyptus and Israeli ruscus. Completing her bouquet was a rosary in memory of her late grandmother, Linda Landry and chaplet in memory of the late Miles Liner.
Randi Savoie, cousin of the bride, was maid of honor and Kelly Matte Burch, sister of the groom, was matron of honor. Bridesmaids were Ashley Matte Cannon, sister of the groom, Amy Cenac, Taylor Gottung, Heather Isham, Kaitlin Kates and Allison Russo. Junior bridesmaids were Andi Duay, Blair Duay, Hollyn Duay and Layla Landry, all cousins of the bride.
The bridesmaids wore full-length, sleeveless gowns of ivory georgette with a v-pleat detail at the bodice and pleated skirt. Accenting the dresses was a jeweled belt of crystals and pearls, a gift from the bride.
They carried clutch bouquets of white and ivory peonies, roses, tulips, freesia and eucalyptus.
Flower girls were Audrey Isham and Whitney Reppel, cousin of the bride.
Serving as ring bearer was Britton Burch, godchild of the groom.
David Alan Burch Jr., brother-in-law of the groom, served as best man. Groomsmen were Drew Landry, brother of the bride; Benjamin Boudreaux; Zachary Case, Grant Dozar; Grant Garber; Asa Isham and Max Nelkin. Junior groomsmen were Hayden Landry and Hunter Landry, cousins of the bride.
Ushers were Michael Kleinpeter and Josh Riley, brothers of the bride; James Angelle, Brennan Flick and Travis Laurent.
A reception followed at the Petroleum Club of Morgan City.
An artist was present, creating a large painting of the reception and guests as a keepsake for the newly married couple.
The bride’s cake was a four-tiered confection in ivory buttercream decorated with a pearl border around each tier and embellished with fresh flowers. Up-lighting and a large floral arrangement with greenery decorated the bride’s cake table backdrop.
The groom’s table depicted a duck hunting theme including personal photographs of the couple and their black Labrador retriever. The groom’s cake was a two-tiered chocolate confection with dark chocolate drizzled icing and chocolate-covered strawberries on the top and corners.
Guest tables were decorated with large, gold candelabra and floral arrangements of white and ivory roses, hydrangeas, snapdragons, gladiolus and various greenery.
Guests were treated to favors of homemade candies and cookies made by family and friends of the bride.
Prior to the wedding, a rehearsal dinner was hosted by the groom’s parents at the Petroleum Club.
Prenuptial parties included an engagement party and a bridal shower hosted by the bridesmaids and bride’s family, and a honey-do crawfish boil hosted by the couple’s family members and friends. A bridal brunch hosted by Mynette Zimmer, grandmother of the bride, was held the morning of the wedding.
The bride is a graduate of Berwick High School and Louisiana State University. She is an English teacher at Berwick Junior High School.
The groom is a graduate of Central Catholic High School and LSU. He is a project manager for Conrad Shipyard.
The couple honeymooned in Antigua and reside in Morgan City.