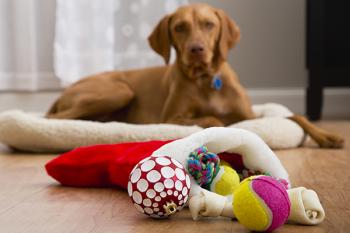 LEVITTOWN, Pa. (AP) — A Philadelphia puppy is getting back to his bouncy self after two plastic squeaky toys were removed from his stomach.
Doctors at Veterinary Specialty & Emergency Center in Levittown say the only sign that 6-month-old Jasper was having problems was he couldn’t keep food down. He otherwise seemed energetically normal.
They say X-rays showed the two balls were taking up most of the space in the Cane Corso’s stomach.
Dr. Scott Joudrey, who surgically removed the red-and-green balls on Saturday, says “dogs eat crazy things.”
In the last year, the suburban Philadelphia practice treated a bulldog named Elvis that ate three pacifiers and a mixed-breed dog that scarfed down a pair of calf-high boots.
Jasper’s owner, Michael Ehrlich, of Philadelphia, says he thinks the dog swallowed the toys weeks ago.