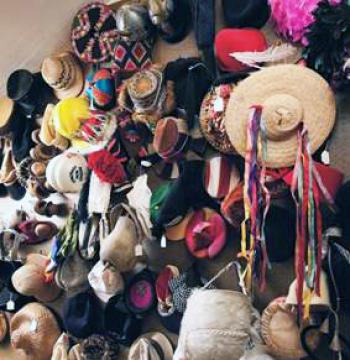 The “Hats Off to Dr. Seuss!” touring exhibition will be in New Orleans set Thursday to Feb. 14 at the AKG Gallery, according to a tour news release. Admission is free.
On exhibit will be Ted “Dr. Seuss” Geisel’s never-before-seen hat collection alongside his little-known Secret Art, a series of estate-authorized works adapted and reproduced from Geisel’s original drawings, paintings and sculpture. Pieces will be available for viewing and purchase through the run of the exhibition and may be seen online at www.thestripedhat.com.
In his artwork, as in his personal life, Dr. Seuss saw hats as transformational, the news release said. And from the time he was a small boy in Springfield, Massachusetts, he was aware of their inherent magic. Far beyond their functionality, hats were the accent — the exclamation point — on a person’s behavior. They could entertain, delight and embellish, even tease and taunt, but most of all, hats helped Dr. Seuss deliver a world of life-changing inspiration.
The first recorded mention of Dr. Seuss’s hat collection came from his sister, Marnie, who visited Geisel in New York in the autumn of 1937. She reported in the Springfield Union-News, November 28, 1937, “Ted has another peculiar hobby — that of collecting hats of every description. Why, he must have several hundred and he is using them as the foundation of his next book. I have seen him put on an impromptu show for guests, using the hats as costumes. He has kept a whole party in stitches just by making up a play with kitchen knives and spoons for the actors.”
That “next book”— Dr. Seuss’s second of 44 — became The 500 Hats of Bartholomew Cubbins.
The Hats Off to Dr. Seuss! Exhibition delivers a unique opportunity to view Dr. Seuss’s hat collection and view their direct impact on his works of art, the news release states. Traveling in a specially retrofitted old fashioned steamer trunk, this exhibition premiered at the New York Public Library, and was the first of a handful of stops across the country.
Also arriving with this exhibition are signed Green Eggs and Ham: Would You? Could You? In a Car serigraph prints featuring the signature of famed celebrity racecar driver, Jeff Gordon, whose foundation — the Jeff Gordon Children’s Foundation — is dedicated to finding a cure for pediatric cancer.
Gordon’s foundation funds programs that improve patients’ quality of life, treatments that increase survivorship, and medical research to find a cure, the news release said.
The Hats Off to Hope! Campaign is a collaboration between Dr. Seuss Enterprises, Chase Art Companies, Random House Children’s Books and the Jeff Gordon Children’s Foundation Each purchase of a Jeff Gordon signed Would You? Could You? In a Car print will help Chase Art Companies to support Hats Off to Hope!
There will be a special public event from noon to 6 p.m. Jan. 17 with collection expert Jeff Schuffman.
AKG Gallery is located at 41 Royal St. Gallery hours are 10 a.m. to 5 p.m. Mondays to Saturdays and 11 a.m. to 5 p.m. on Sundays.