Ask a Designer: Decorating around a television 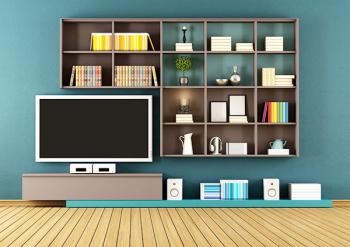 By MELISSA RAYWORTH The Associated Press

Television screens just keep getting bigger, which is great if you’re an avid binge-watcher, but not so convenient if you’re trying to decorate a living room or bedroom with one wall dominated by a huge glass rectangle.
“TVs are kind of a necessary evil,” said Marianne Canada, digital host and design expert at HGTV.com. “We want them to be big and have that great picture quality. But you run into that problem of having, literally, this big black rectangle pulling focus in your den or living room.”
Los Angeles designer Theodore Leaf, host of “Living Big Under 1,000 Sq. Ft.” on Apple TV’s new channel The Design Network, finds that people are resisting the idea of organizing their living space around a screen. Yet they want the option of a great viewing experience when the mood strikes.
In rooms where windows provide a good view, things get even more complicated: “How do you orient the furniture to embrace the view, but obviously live a normal life and watch television?” Leaf asks.
Here, Leaf, Canada and Caleb Anderson, co-founder of the New York design firm Drake/Anderson, offer creative advice on decorating around a television and even (shhh!) finding ways to hide one in plain sight.
MAKE IT BLEND IN
Some homeowners opt to fill one wall with built-in bookcases, leaving space at the center to hang a TV. It’s an attractive option, but custom built-ins can be expensive, said Anderson, and are a fairly permanent choice.
A more affordable approach: Fill the wall with individual shelves arranged around the television. “Use floating shelves or shelves with really beautiful brackets,” said Canada, and fill them with mementoes, books, and some baskets where you can stash your streaming device or other tech items.
Another option is arranging paintings, framed photos and other decorative items around your television to create a gallery wall, so the screen blends in with other pieces of art. Anderson recently worked on a project in Florida where he created an installation out of circular pieces of art around a television, drawing focus away from the screen.
MAKE IT DISAPPEAR
For small spaces and bedrooms, Leaf is a fan of hydraulic lift cabinets. What looks like a simple sideboard actually has your TV hidden inside. At the push of a button, the top opens and your TV lifts out.
“I have a client that just has an incredible view,” Leaf said, “but she has three kids and they love to watch TV in bed.” A hydraulic cabinet placed in front of a window solved the problem.
Some lift cabinets can be set on a timer linked to an in-home tech system. “It will wake you up with the TV lifting out of the cabinet and the lights going on,” Leaf said.
Another trick for hiding a large TV: Hang sliding pieces of reclaimed wood on tracks affixed above and below the TV. Slide these “barn doors” out of the way when it’s time to watch TV. “That definitely goes with a more rustic vibe,” Canada said.
Anderson agrees that camoflauge can be the solution: He has designed a dramatic custom cabinet with mirrored doors and a TV hidden inside.
If you truly want your TV to disappear, Leaf recommends switching to a retractable screen with a retractable hidden projector in the ceiling.
To save money and effort, you can even skip the screen by hanging a lightweight piece of art where you’ll be watching, and painting that wall a crisp, solid white. When it’s viewing time, simply take down the art and turn on the projector.
FEATURE IT
“Televisions by nature are very modern — hard corners, dark color,” Canada said. And even if your decor isn’t modern, think about “having fun with your television instead of fighting with it.”
One DIY approach: She suggests attaching a wooden frame to the outer edge of your TV (you can make it from pieces of molding, or buy and paint one to suit your style). This works for living rooms and especially bedrooms, “where you can get a really ornate, pretty frame, distress it and then hang it above a dresser,” Canada said. It “helps soften a TV in a room that’s very soft.”
If you’d prefer not to attach things to the TV, mount something behind it: Hanging rustic or reclaimed wood behind the television, Canada said, “gives your eye something else to look at.”
This can also work in a more glamorous, ornate space: Anderson is working on a project on New York’s Upper East Side where a television is mounted in a niche in an upholstered wall with vertical stitching and lacquer details. Rather than hiding the TV, he said, they’ve made it “part of this really interesting, luxurious installation.”