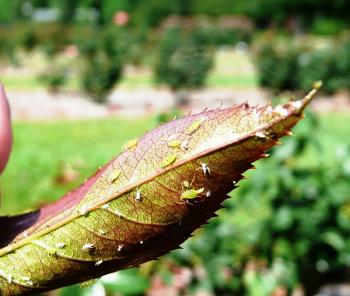 Aphids on roses are common in spring.
--Allen Owings Photo

HAMMOND — Roses continue to be one of our most popular ornamental plants, and home gardeners should learn about and be aware of recommended management practices for them, said LSU AgCenter horticulturist Allen Owings.
Although they come in many types, basic care is the same for most roses. Keys to success include correct sunlight conditions, ideal soil pH, proper pruning, regular fertilization, proper mulching, disease management and insect control.
Roses need full sun in order to perform their best, grow their best and bloom their best, Owings said. This means eight hours or more of direct sun daily. Less than eight hours is not sufficient for ideal performance. Many of us underestimate the amount of sun that our landscape receives.
Soil acidity or pH is important. Ideally, soil pH should be in the 6.5 range, which is considered slightly acid. “Do not guess on soil pH,” he said. “Use the results of a soil test to find out if you need to change soil pH.”
February is the time for heavy pruning for most rose varieties. Prune in early to mid-February in south Louisiana and in mid- to late February in north Louisiana. Then prune lightly again in late August or early September.
Hybrid tea roses need to be pruned more heavily than floribunda, grandiflora and landscape shrubs roses. As you prune roses, reduce the height by half and also thin out a few of the older interior canes in the bushes.
“Fertilization is very important, especially if you don’t follow some of the other management practices and care considerations more carefully,” Owings said.
To maximize spring growth and first flowering in April, fertilize roses in late winter to early spring using a slow-release fertilizer. “You can also fertilize again lightly in early summer and again after late-summer pruning,” he said.
Owings suggests mulching roses with 2 to 3 inches of pine straw. “You can use other mulches, but pine straw seems to be best,” he said. “Refresh the mulch layer as needed.”
Mulch suppresses weeds, minimizes soil temperature fluctuations and conserves soil moisture.
Managing for disease and insects is important. “You should follow a preventive fungicide application program to control blackspot fungus on hybrid tea, floribunda and grandiflora roses,” Owings said.
Usually landscape shrub roses, like the popular Knock Out and Drift varieties, do not need fungicide applications. It is important to control blackspot in spring. If the disease gets started, it is difficult to get under control later in the year.
Major insects affecting roses are thrips and aphids, which should be monitored in early spring. They usually are abundant about two weeks before roses start blooming in April. Most garden insecticides along with organic insecticides like horticultural oil and spinosad will control these pests.
If you want to plant roses, think about low-maintenance varieties like Drift and Knock Out, Owings said.
He also suggests considering old garden roses for more use in Louisiana.
“And we also should include Earth Kind rose varieties in any home landscape planting featuring roses,” he said. Some of the favorite Earth Kind varieties include Belinda’s Dream and Duchesse de Brabant.
“Also try the 2016 American Rose Society Gulf District Rose of the Year, Cinco de Mayo,” he said.
Choosing the right varieties and following these recommended practices will help your roses be successful long-term in the landscape, Owings said.