Get It Growing: Fall is tardy in Deep South 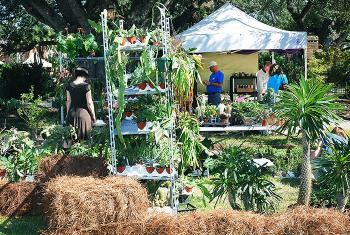 Garden shows, like the Fall Garden Show at the Botanical Gardens in New Orleans City Park, provide opportunities to get ideas and find new plants for the cool-season landscape. Now is the time for fall landscape grooming.
--LSU AgCenter/Johnny Morgan

For much of the nation, September marks the end of summer. Indeed, according to the calendar, fall will officially start at the autumnal equinox on Sept. 22. For those of us living in the Deep South, however, it would be wishful thinking to think fall weather is a certainty in September. We are all familiar with Septembers when temperatures stay in the upper 80s and 90s throughout the month.
Still, there is something going on now. Nights often begin to get a little cooler. And when you walk out in the morning, the air feels just a bit more comfortable. The days are getting shorter, and that is beginning to have an effect. Although uncomfortably hot weather is not yet a thing of the past, we can begin to appreciate that cooler weather is not too distant. And if we are lucky, cool fronts this month can make the weather downright pleasant.
The word “fall” commonly conjures up images of harvest, falling leaves, the end of the growing season and the beginning of dormancy leading into winter. For gardeners in Louisiana, however, the traditional fall period is not a time of winding things down in the garden but of revival and renewed effort. Finally, we can get back into our gardens and enjoy ourselves as the debilitating heat of the hot season loses its grip on the weather.
For the next two months we will experience a gradual shift to milder weather. There will be cool spells followed by decidedly hot summer-like weather. But as we move into late October, cooler weather will begin to dominate the scene. Not until mid- to late November do we generally experience the nippy cold weather and changing leaves that tell us that fall has finally arrived.
Looking around now
You might begin to notice an increase of vigor in your warm-season bedding plants in September. Even heat-tolerant flowers do not always look their best in August. But shorter days mean fewer hours of intense heat, even though the daytime highs may stay about the same, and plants begin to experience less stress. This encourages a “second wind” in the flower garden that may last well into October or early November. Given this, consider cutting back some of your summer bedding plants and flowers that have grown tall and leggy over the long growing season. Do this in August or early September at the latest, and generally cut plants back about one-third to one-half their height.
Things to do in the landscape now
While you’re at it, it might be a good idea to impose some order on those overgrown flower beds. In addition to cutting back, groom the plantings to remove dead flowers and unattractive foliage. If plants are leaning or have fallen over onto nearby neighbors, prop them up or stake them so they will stand upright. Just about every year about this time I find the remains of some unfortunate plant that was overwhelmed when some larger, more vigorous nearby plants leaned over it.
If you haven’t done so, cut back your everblooming rose bushes, including such popular groups as hybrid teas, grandifloras, floribundas, miniature roses, teas, polyanthas, Bourbons, Chinas and English roses. Many old-fashioned climbers, ramblers, Lady Banks roses and some bush roses that bloom heavily in spring to early summer and then stop will bloom next year on the growth they made this summer and should not be cut back now.
It’s too early to plant hardy trees, shrubs, ground covers and vines in the landscape. Temperatures in the 80s and 90s will likely be common in September, and this is still too stressful for new plantings. Wait at least until the cooler weather of October. The ideal planting season for hardy trees, shrubs and ground covers is November through February.
It’s also too early to plant cool-season bedding plants, even though they will begin to show up in area nurseries this month. Even if you have an area where plants have finished flowering and have been removed, it’s still too hot to plant most cool-season bedding plants. Mulch over the area and wait for more reliably cooler weather of October, or even November, to plant the beds. If you feel you need to plant something now, consider some of the more heat-tolerant cool-season bedding plants that include petunias, dianthus, calendula, snapdragons and alyssum.
Spring-flowering bulbs, such as tulips and daffodils, also become available this month at local nurseries and garden centers. Given that September is still so warm, there is no hurry to plant them. Purchase bulbs now, if you like, while the selection is good. But keep them indoors at room temperature until October or November when the weather has cooled down, and plant them then.
The chrysanthemum is often considered the floral symbol of fall, and you will begin to see them available for sale this month as well. Unfortunately, when planted in the garden while daytime highs are still in the upper 80s and lower 90s, the flowers will rapidly wither in the heat. It’s generally best to wait until reliably cooler temperatures to purchase chrysanthemums so the colorful display will last longer in the garden.
So, lets anticipate the soon-to-arrive (we hope) milder weather and enjoy the delights of gardening over the next few months. But when the fall equinox arrives later this month, don’t get carried away. For us, summer will still be lingering for a while.