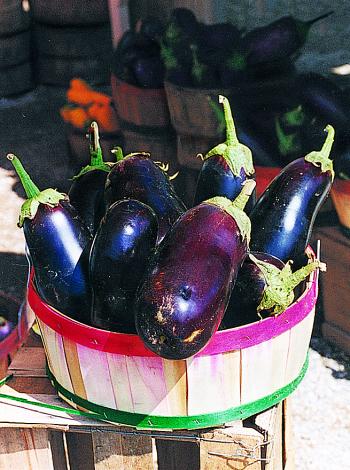 By DEAN FOSDICK The Associated Press

Eggplant hasn’t been a favorite of American home gardeners, but a new hybrid that’s billed as an alternative to meat could be changing that.
The hybrid dubbed “Meatball” has powered its way into the home-garden market this spring. Sales rival those of tomatoes and peppers, among the most popular items in the W. Atlee Burpee & Co. seed catalog, said the company’s chairman and chief executive officer, George Ball.
“This new one is not like any eggplant we’ve ever bred or found or seen,” he said.
The Meatball contains more water, which resists oil in the frying pan, Ball said.
“That makes for a more refreshing and less oily product,” he said. “It also is seedless, giving it two important genetic virtues.”
Kitchen trials were held with friends, family and focus groups using the Meatball as a hamburger or steak-like primary ingredient, Ball said. “It won hands-down when compared to both veggie burgers and meat” in taste tests, he said.
Maturity dates for the new eggplant range from 55 to 78 days, depending on location.
Eggplants are native to India, much of China and Southeast Asia, so most species thrive in high heat. Many of the later European versions were white or yellow, resembling chicken or goose eggs; hence the name eggplant.
Their earliest use was believ ed to be more medicinal than culinary. Eggplants’ fruit, roots and leaves were used for treating abscesses and intestinal problems.
Thomas Jefferson often has been credited with importing eggplants into American gardens in the late 1700s, but they were slow to gain popularity as a cooking staple, a trend that continues today.
“I took some of my surplus eggplant to a local food bank last year and they said it was the first time they’d ever gotten it,” said Marianne Ophardt, Benton County director for Washington State University Extension.
“Recipes are limited for making it more flavorful, which may account for some of its slow acceptance,” she said. “It generally doesn’t have the same crispness or flavor as tomatoes. A lot of people harvest it when it’s over-mature, which makes it taste bitter and seedy.”
Eggplants are easy to grow, however, and are tougher in the garden than peppers, Ophardt said.
“I grow mine in a half wine barrel,” she said. “I learned the hard way not to put too many (plants) in. They can grow fairly large and take up containers.”
Eggplants have few pest problems, she said: “Some aphids, maybe, but even without treating them they’ll go away.”
And the vegetable has changed over time.
“Colors vary now from bright purple to oranges, whites and striped,” said Ophardt. “Some are a little different flavored. I use them a lot when cooking Thai food.”
There is a lot of eggplant diversity in the garden market, including heirlooms, Ophardt said. “That includes some that are more ornamental than anything else.”
Online:
For more about growing eggplant, see this University of Georgia Extension fact sheet: http://extension.uga.edu/publications/detail.cfm?number=C1028