Severe birth defects not as lethal as docs once said 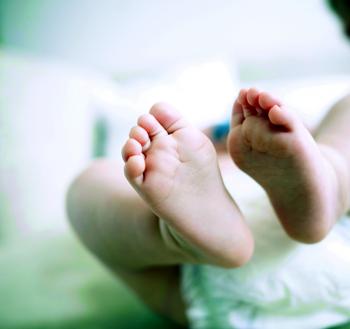 CHICAGO (AP) — Parents of newborns with rare genetic conditions used to hear the grim words that the severe birth defects were “incompatible with life.” Support groups and social media showing the exceptions have changed the landscape. So has mounting research suggesting that not all such babies are doomed to die.
The latest study focuses on trisomy 13 and trisomy 18 — genetic conditions that typically cause mental impairment, facial and organ abnormalities, breathing problems, heart defects and other medical problems. They involve extra copies of certain chromosomes.
Two decades of data from Ontario, Canada, illustrates how rare the conditions are and how most babies still die. Of the 428 babies born, only 65 — less than 20 percent — lived for at least a year. Twenty-nine survived at least 10 years. There’s little previous research on these children surviving that long, and the new results suggest the birth defects are not always as lethal as doctors have advised parents.
The study doesn’t include information on survivors’ quality of life, but severe disabilities are the norm. The researchers say without that information, the study alone can’t guide decisions about how to treat children with the conditions.
Former GOP presidential candidate Rick Santorum’s 8-year-old daughter, Bella, has trisomy 18. His wife, Karen has said that their doctor told the family there was no need to bring their newborn home with oxygen despite medical problems that included breathing difficulties. “You have to learn to let go,” she says they were told.
Online images of smiling kids with the conditions has led some parents to doubt the dire warnings and seek aggressive and costly surgeries to correct organ abnormalities. Ethicists say the power of social media is changing the landscape for how the medical community views these children, although some still say it is acceptable to let newborns with the conditions die.
In the study, about 70 percent of the 76 infants who had surgery lived for one year after the procedures. But whether surgery prolongs survival is unclear, said Dr. Katherine Nelson, the Canadian study’s lead author and a palliative care specialist at Toronto’s Hospital for Sick Children. Most infants in her study who had surgery were at least 3 months old when they had the operations, suggesting they were healthier to begin with.
The study was published Tuesday in the Journal of the American Medical Association.
A separate study from nine states found 5-year survival rates of 10 percent to 12 percent for trisomy 13 and 18 children. The highest rates were in those who had aggressive treatment, according to the research, published in April in the American Journal of Medical Genetics.
Despite the survival of some, an editorial accompanying the Canadian study says it is “ethically justifiable” to withhold aggressive medical treatment and let some infants die while offering aggressive treatment to others. Parents’ values should drive the decisions, said Dr. John Lantos, a medical ethicist at Children’s Mercy Hospital in Kansas City who wrote the editorial.
Lantos notes that 30 years ago, new doctors were taught that the two conditions were fatal, but “in the social media age, however, everything changed,” he wrote.
Sometimes support groups and imagery of surviving children give other parents false hope. But Lantos said it also empowers parents, “by allowing them to share stories, to compare doctors and to present their physicians with information that challenge medical literature,” he said.
Kara McHenry’s son, Corbin, lived for four months after his birth in 2013. Prenatal tests found trisomy 13; doctors recommended an abortion. But she found a support group on Facebook showing happy-looking children learning to walk. She also found a hospital that offered treatment, in Pennsylvania, 400 miles from her home near Greenville, North Carolina.
“I couldn’t just give up,” McHenry said, so the family temporarily moved north.
During his short life, Corbin had pneumonia, a heart procedure and surgeries to help him breathe and to treat a bowel infection. The family was able to bring him back to North Carolina, but he was never well enough to go home
“He was going to be impaired mentally and physically,” McHenry said. She chose invasive care in hopes that he’d beat the odds, but says she has no regrets.
Jared Hiner is involved with a support group for families whose children have even rarer genetic disorders that include a condition called Wolf-Hirschhorn syndrome. The group’s website provides information about the conditions and a video with inspirational photos and background music.c
The Fortville, Indiana, musician said when his daughter Kamdyn was born doctors told him her chances of living past age 2 were bleak.
“They told us she would never talk, never walk, wouldn’t have a personality,” he said.
Kamdyn is 14 now, mentally and physically delayed, but attending school and able to interact with her family. No one talks much about her future, but for the moment, “she’s doing fantastic,” Hiner said.
He said social media sites help give families needed hope, “but I don’t think it’s false hope. I think it’s more realistic hope that, ‘Hey, we can live with this,’” even when the future is uncertain.
—Online:
Trisomy: https://ghr.nlm.nih.gov/condition/trisomy-13
https://ghr.nlm.nih.gov/condition/trisomy-18