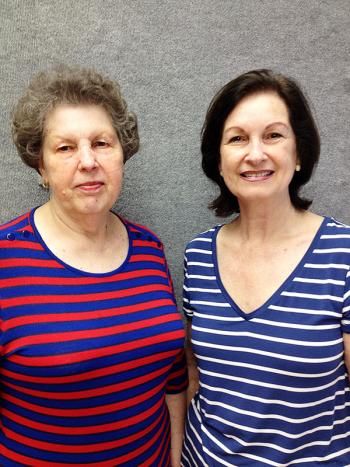 Karen T. Spinella, left, and Diane T. Martin are the featured Artists of the Month for May at the Artists Guild Unlimited Everett Street Gallery at 201 Everett St. in Morgan City. A reception honoring them will be held Tuesday. The show will open Wednesday and will run through May 28. Gallery hours are 1 to 4 p.m. Wednesdays through Fridays, and 11 a.m. to 2 p.m. on Saturdays.
--Submitted photo

On Tuesday from 6 to 8 p.m., the Artists Guild Unlimited Everett Street Gallery in Morgan City will host an “Artists of the Month” reception, showcasing Diane T. Martin and Karen T. Spinella as co-artists for May. The show will open Wednesday and will run through May 28.
Gallery hours are 1 to 4 p.m. Wednesdays through Fridays, and 11 a.m. to 2 p.m. on Saturdays.
Martin has spent most of her artistic time on writing. After becoming an English teacher in 1960, she began seriously writing poetry, short stories and a novelette, some having been published.
Recently, she co-authored and published a book (Education: Roast & Toast) culling stories, emails and notes from her 30-plus years of teaching to get a comical outlook of classroom humor.
After retiring from teaching, she decided to take art classes in different media. Eight years ago, she took her first art class in oils with Elaine Wiggins of Morgan City. From there she went on to take a workshop in watercolor with Judi Betts of Baton Rouge.
Pursuing watercolor, Martin studied for a while under Helene Allen of Morgan City and Danielle Delcambre of New Iberia. She also attempted pastels with Janet Robinson of Morgan City. Along the way, she attended an oils workshop taught by Carol Hallock but decided that watercolor is her medium.
Martin is an avid photographer of flowers in all outdoor settings. This love for photography led her to a workshop led by Donna Smith and the sale of some of her photographs.
Spinella started taking art lessons in a variety of media around 1989 from Bob Greenwood of Morgan City until his death. She has taken oil painting with Wiggins and watercolor with Allen.
Through the years, she has taken workshops with noted artists: watercolor with Mary Jane Cox, Elmore Morgan, Betts and Kathy Miller Stone; oils with Hallock and pastels with Sandra Burshell.
Working with all media, Spinella admires watercolor most but finds it the most challenging.
Both artists are members of Artists Guild Unlimited. Their works can be seen at the gallery located at 201 Everett St.