From the Editor: $50 billion doesn't go as far as it used to 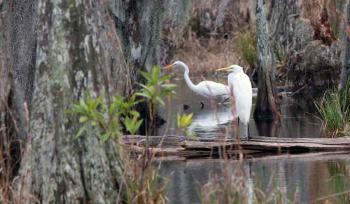 The Daily Review/Bill Decker
Nothing says "Louisiana" like a wetlands scene, such as this one taken Wednesday along U.S. 90 near Amelia. But protecting the state's coastal wetlands turns out to be expensive and complicated.

By BILL DECKER
bdecker
@daily-review.com
You’d think that, with a Coastal Protection & Restoration Authority in place, a source of funding from BP oil spill compensation and a new draft master plan to guide all the work, Louisiana’s well-documented coastal erosion problem will, someday in the near future, sleep with the fishes.
We got this. Right?
Well, yes and no.
Two people familiar with Louisiana’s restoration plans threw a dose of reality at anyone who thinks the disappearance of priceless coastal land is about to get licked. They are Nedra Davis, executive director of the Chenier Plain Protection & Restoration Authority, and Brady Couvillion, a research geographer with the U.S. Geological Survey. They spoke to reporters Jan. 30 at the National Wetland and Aquatic Research Center in Lafayette.
They’re nice people. They are articulate advocates for the draft 2017 coastal restoration master plan, designed to protect that state’s economic, environmental and public safety interests. But their presentation was a downer.
The overall problem is depressing enough. Since the 1930s, erosion has stripped away Louisiana coastal land equivalent in size to Delaware. That’s a football field every hour.
The causes identified by Couvillion are sea level rise, the estimate of which doubled between the 2012 plan and the 2017 draft; land subsidence, the cause of which seems to be up for grabs; storms; an extensive levee system that prevents sediment from renewing coastal marsh; and infrastructure, such as canals, that allows salt water to intrude into and destroy freshwater marsh.
All that, Couvillion said, is bad for Louisiana’s fish hatchery; for fragile species that live on the coast; and for protection against storm surges, which tend to be slowed by our coastal areas.
The 2017 master plan, an update of the 2012 version, calls for spending $50 billion over the next 50 years on a list of projects that, together, are supposed to rebuild or protect 800 square miles of coastal land.
But Davis said no one knows yet where all the $50 billion will come from. And that figure represents only about a fifth of the value of projects suggested for inclusion in the plan.
In any case, Couvillion said the 800 square miles of new or protected coastal land isn’t the big fix. The planned projects will help, he said, but it’s not enough to stop coastal erosion.
Political questions also loom, in both Baton Rouge and in Washington.
During the January 2016 flooding in St. Mary and St. Martin parishes, flood control authorities sank a barge in Bayou Chene to prevent back-flooding in the Avoca Island area. Local levee and emergency preparedness officials have been hoping for a $100 million permanent structure to replace all that barge-bobbing.
The permanent fix was in the 2012 coastal master plan but was excised from the 2017 version. Our own state Sen. Bret Allain, R-Franklin, objected and threatened to hold up approval of the new master plan unless it contains the Bayou Chene structure. As a member of the Senate Natural Resources Committee, Allain is in position to make trouble.
So is our new president.
Remember the sea level rise that Couvillion partially blamed for coastal erosion? The new estimate calls for a rise of 2.72 feet, up sharply from the 2012 plan, at least in part because of new federal data on the impact of climate change.
Davis said the new number is based on the best science available from federal researchers and that federal research will continue to guide the Louisiana estimate.
Those estimates are based in part on a prediction about the effects of climate change. President Donald Trump has called the human component of global warming a hoax. On inauguration day, climate change information disappeared from the White House website.
The new administration also forbade Environmental Protection Agency employees from disseminating scientific information to the public through social media, according to multiple media reports. So it’s not entirely clear how much federal research there will be or how much data will find its way to state researchers or the public.
Put it all together, and a plan that called for “no net loss” in 2012 has become a blueprint for slowing, but not stopping, the disappearance of Louisiana’s coast.
Talk about erosion.
Bill Decker is managing editor of The Daily Review.