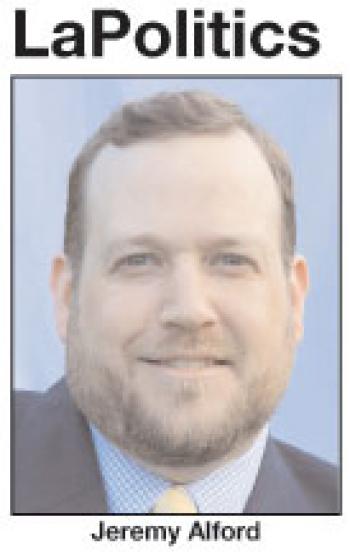 Even though the regular campaign season for the Louisiana Legislature won’t come around again until 2019, there’s already one open seat that will be decided by a special election next year and more could soon follow.
In another surprising trend, candidates across the state are already starting to announce their legislative bids for 2019 — showing how even down-ballot campaigns are starting earlier than ever.
Part of this early posturing could be due to terms limits, which will force out somewhere between 60 percent and 70 percent of the entire House and Senate in roughly three years.
The latest development comes from Sen. Danny Martiny, R-Metairie, a longtime Capitol player who started his legislative career in the House in 1994.
Martiny said he is considering a potential run for a different elected job closer to home in the near future. But it largely depends on what happens on this coming Election Day.
While he has been urged to consider running for judge in the coming years, Martiny is keeping tabs on the Jefferson Parish Council seat held by Ben Zahn, who is expected to win his bid for Kenner mayor on Dec. 10. If Zahn is successful, the resulting vacancy on the parish council could be a good fit for Martiny, who is term-limited.
“I’m considering that,” Martiny told LaPolitics.
In turn, if Martiny is successful, that would trigger a special election in Senate District 10. Rep. Kirk Talbot, R-River Ridge, has already said he is interested in running.
Martiny’s potential exit from the upper chamber would create some openings for leadership gigs as well. He is the commerce chairman and the chairman of the Senate GOP delegation.
Also dependent on the Dec. 10 runoffs are whether Sen. Bodi White, R-Central, wins his bid for Baton Rouge mayor and if Rep. Mike Johnson, R-Shreveport, is victorious in the 4th Congressional District race.
If both win, then two special elections will be needed next year.
There’s already a special election scheduled for March 25 in House District 92, where former Rep. Tom Willmott won his primary campaign for the Kenner City Council.
As for some very early posturing, Iberia Parish Councilman Ricky Gonsoulin is already telling supporters that he will run in House District 48 next cycle, in 2019. That’s the seat being vacated by House Speaker Taylor Barras, R-New Iberia, due to term limits.
East Carroll Parish Police Jury President Lee Denny, who lives in House District 19, has also already started campaigning and intends to be on the ballot. This is the district currently occupied by Rep. Bubba Chaney, R-Rayville, who is likewise term limited.

The next mayor
of Lake Charles
Calcasieu Parish Police Juror Nic Hunter officially announced last week that he will be a candidate for Lake Charles mayor on the March 25 ballot.
The retirement of longtime Mayor Randy Roach has sent politicos scrambling and the race to succeed him is well underway.
Hunter has deep roots in the community and he still owns and operates Harlequin Steaks and Seafood, which his grandparents opened more than six decades ago.
He won’t face anything that resembles a clear field, though.
Others said to be running or at least thinking about it include Lake Charles City Councilman Dana Jackson, who started positioning early; Police Jury President Chris Landry; and attorney Marshall Simien.
A last-minute sleeper candidate could slip in as well, local politicos say.

Elected officials
want LMA job
There were eight candidates who were slated to be interviewed last week for the executive director position at the Louisiana Municipal Association, including one state lawmaker and two mayors.
Rep. Greg Cromer, R-Slidell, threw his name into the mix, along with Columbia Mayor Richard Meredith, Oak Grove Mayor Adam Holland and former Delhi Mayor Lynn Lewis.
John Gallagher, who is currently serving as the interim director, was on the interview list as well, in addition to Geoffrey Large, Blane Faulk and Francis T. Delhomme.
Three final candidates are expected to be selected and they will be interviewed again by the LMA board on Dec. 13, which is also when the new executive director will be chosen.
Former LMA Executive Director Ronnie Harris vacated the position in October to seek opportunities in the private sector.

Have you heard
about Heard?
William Wright Heard was the first Louisiana governor elected in the 1900s and he was also the person responsible for choosing the state’s seal and motto.
In 1902, just two years after being elected, Heard told the secretary of state to start using a seal that depicted a pelican tearing into its own breast to feed its young.
And around that iconic image: “Union … Justice … Confidence.” (Heard picked that out as well.)
When Heard was elected in 1900, only 76,000 voters showed up at the polls, down from 203,000 voters four years prior. The Constitution of 1898 had disenfranchised African-American and poor white voters.
Still, Heard, a Union Parish politician, just couldn’t excite the masses. He had held the statewide elected position of auditor for two terms and had served in the state House, but seemed ill-prepared for the governorship.
A better administrator than a statesman, Heard did help create the state prison system and was in office for Louisiana’s first discovery of oil via a rig in what is now Jefferson Davis Parish, although some historians dispute that Jennings Oil Company No. 1 was actually the first.
Heard took office at the relatively young age of 47-years-old and served just one term, as the law allowed at the time.
After leaving the post of governor, Heard became a full-time banker and lived out the rest of his days in New Orleans.

They said it
“This makes 14.”
—Barry Dusse, director of the governor’s Office of Planning and Budget, announcing yet another midyear budget shortfall to lawmakers, in the Associated Press
“Time to stop, isn’t it?”
—Sen. Francis Thompson, D-Delhi, in reply
For more Louisiana political news, visit www.LaPolitics.com or follow Jeremy Alford on Twitter @LaPoliticsNow.