4 charged in robbery of accused murderer 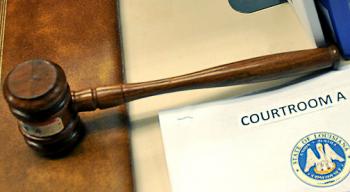 Seven weeks before being accused of murder, Justin Patterson, reported being beaten and robbed at gun point in his house by three teenagers and a 21-year-old man who quickly fingered each other, according to documents associated with 16th Judicial District Court proceedings this week.
Patterson, 26, and his girlfriend, Ashley Rudolph, 21, walked to the Patterson police station April 4 and reported they had been robbed by four men at their Wise Street residence, police affidavits reveal.
Patterson had an injured mouth and ear from where he said he had been struck with a gun repeatedly over a 20-minute period by intruders, the affidavit said. The intruders threatened to shoot him and his pregnant girlfriend if they did not give them money, he said in the affidavit.
Patterson police arrested Troy Richardson, 19, Wanya Francis, 18, and Austin Ray, 17, and issued a warrant for the arrest of Randolph Joseph, 21. Joseph turned himself in to the St. Mary Parish Sheriff’s Office in Centerville. They are all charged with two counts of armed robbery.
Patterson was later indicted for second-degree murder in the May 20 shooting death of Mikki Dauntain, and Rudolph was charged as an accessory after the fact in the murder.
A pre-trial hearing was held for Richardson on Tuesday for the Patterson robbery and his trial date was set for April 14 with his bail reduced in half to $100,000. A hearing on Monday to reduce Ray’s $100,000 bail was rescheduled to Jan. 29.
Francis’ bail had been reduced from $175,000 to $100,000 on Dec. 10. He confessed to being one of the intruders, but said “he didn’t have a weapon” and identified Joseph and Richardson as having guns while Ray was also there without a gun, the arrest affidavit said.
Patterson police Det. Larry Jones reported Francis initially denied being at the crime in a written statement; in a second statement said he witnessed the incident; and in a third written statement said he was with the other three as Richardson and Randolph stole money, jewelry, cell phones and marijuana.
A hearing has been scheduled on Jan. 29 on the admissibility of Francis’ confession at his trial.
Patterson, a convicted drug dealer, and his girlfriend reported $600, jewelry and cell phones as stolen but made no mention to police of having marijuana stolen.
Richardson denied being at the crime, but he fingered his three co-defendants as being in the victims’ home, Jones wrote. Richardson said he declined to join the three in a planned burglary, but Ray came to his home “stating Wanya wanted him to hide a gun,” which he said he refused to do, Jones’ report said.
Patterson claimed to identify Richardson from his voice while Rudolph said she recognized Richardson’s voice and enough of his facial features to identify him as being there, the report said. Richardson was the one giving orders during the robbery and had used Joseph’s name during the robbery, Patterson said in the report.
Francis’ final written statement said Richardson had a get-away car parked around the corner from Patterson’s house that the group used to flee the scene, the investigative report said.
Joseph expressed surprise that he would be named by his co-defendants as being at the scene, Jones’ report said.
Joseph said Richardson accused him of being there because Richardson was mad that “I took his weed from him,” Jones said in his report. Joseph gave the investigator the names of Richardson, Francis and Ray, but said he did not know who the fourth person was, Jones wrote.
Joseph’s trial date has been set for Feb. 3 and he is in jail with a $250,000 bail. His trial date is also scheduled to take up unrelated charges of principal to armed robbery and principal to aggravated kidnapping from a Jan. 26, 2013, incident in which a victim was robbed of $224 and made to run in a cane field near Baldwin, according to a probable cause affidavit.
Joseph also faces trial for a May 2 vandalism incident while in prison and another incident where he is accused of punching a prisoner and fracturing his jaw on Aug. 29.
The pistol-whipping robbery and its four arrests in Patterson and then weeks later the murder in Morgan City that ended up with eight arrests are examples of the acceptance and glorification of a lifestyle of violence and drugs, according to Patterson Police Chief Patrick LaSalle.
“You are going to see an increase in the influx of violent crime and need to have a heightened awareness because of the propensity to violence that some have,” LaSalle predicted. “We are turning into the Wild, Wild West.”