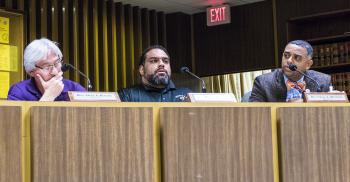 Parish council members did not remove from the table a proposed housing development item in Garden City.
The preliminary approval by the zoning board item was tabled at the Feb. 8 meeting of the parish council. Meanwhile, an ordinance was introduced Wednesday that, if adopted in March, would rezone the property from residential back to its original agriculture designation. Councilman Dale Rogers offered that ordinance for introduction.
Councilman Craig Mathews said “introducing an ordinance to defeat the purpose of approve seems to me not the right thing to do.”
The planning and zoning board’s preliminary approval of the development is a recommendation, not an approval, which lies solely with the council, Chief Administrative Officer Henry “Bo” LaGrange said.
Councilman J Ina requested a summation on previous planning and zoning recommendations that were denied by the parish council; LaGrange said the staff could provide that information.
Property owner and developer Lloyd Harris said the parish unified development code does not provide for parish council rezoning of a property by ordinance.
“We can change that,” council Chairman Paul Naquin said.
Mathews said a Feb. 21 correspondence indicates that the Bailey family, original owners of the property, are against the rezoning.
“Is that something we normally do?” he asked, but received no answer.
Rogers said he was elected to represent the constituents of Dist. 3. “My district does not want this; I will do anything that I legally can to try to stop it,” Rogers said. “There’s nothing sinister, there’s nothing racial about it.”
Ina said Rogers’ statement was “an insinuation” and he never made such an allusion. “I’m asking for statistical purposes so I can know how many times (a denial) has happened.”
Harris said, “I’m convinced it’s me, not the project. I watched at the planning and zoning meeting…approved two gentleman’s clubs in Morgan City without objection…is it the project, Mr. Chairman, or is it just me? I have an investment of $320,000 out there. If the powers that be chose not to approve, just buy me out. I’m okay.”
Harris said he is on solid ground with the project.
“At no time did I direct my comments to Councilman Rogers,” Mathews said. “My questions and my remarks have been directed at this council and chairman. I’m here to ask questions…it takes a vote of six people for anything to pass.”
Mathews said though it has been claimed that all members of the community near the development are against it, he has learned of others who have no problem with it.