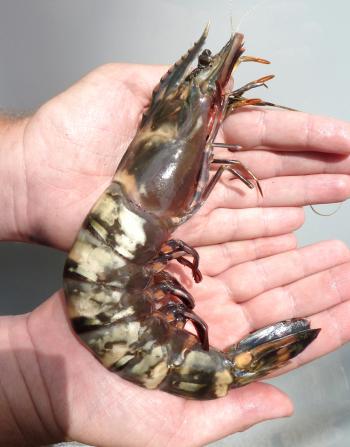 (AP) — Ecologist Jacoby Carter is shin deep in the muck of a roadside ditch in St. Mary Parish, chasing down a tip that one the latest foreigners to invade Louisiana is on the move.

The signs are obvious — bright pink clusters of eggs cling to plant stems and culverts. The ditch is filled with giant apple snails, each about the size of a tennis ball.

The snails, native to South America, were first documented in Louisiana in 2006. Since then there have been sightings in much of the southeastern corner of the state.

Those found in August in a ditch running through a Patterson neighborhood indicate a westward movement of an animal with such a voracious appetite that scientists fear it could wreak havoc on coastal wetlands and waterways.

"They have potential for explosive growth," said Carter, an invasive-species specialist at the National Wetlands Research Center in Lafayette.

Louisiana has had a long relationship with exotic plants and animals that come from afar and arrive here to thrive in the state's sub-tropical environment.

The poster child for invasive species in the state has long been the nutria, a South American rodent whose taste for wetland vegetation has helped destroy delicate coastal marshes.

Most come from environments similar to that of Louisiana. But here, they don't frace predators or environmental conditions that kept them in check, opening the door for sometimes unbridled growth.

And some, like the giant apple snail, seem ready-made to gain a strong foothold in the local environment.

The snail grows so large that it has fewer predators than Louisiana's native snails, and the female can lay a few thousand eggs each week — eggs which the mother deposits above the water and which contain poisons that discourage other animals from eating them.

The snails were common in the aquarium trade before the state banned them in 2012. Researchers believe the animals might have been introduced into the wild by hobbyists who dumped their aquariums outdoors.

How fast the snail population will expand and how much damage it might do is an unknown that troubles Michael Massimi, the invasive-species coordinator for the Barataria-Terrebonne National Estuary Program.

"They eat a ton of plant material. Anything they can get their tiny little mouths on," Massimi said. "You are converting a water body from one dominated by plants to one dominated by algae."

In an ecological irony, one the most problematic invasive species in recent years pushes an aquatic ecosystem to the other extreme, one dominated by a plant that chokes the life out of water bodies.

Louisiana has fought invasive water hyacinth and hydrilla for decades, but LSU AgCenter scientist Dearl Sanders said few aquatic weeds can match the destructive potential of giant salvinia, a Brazilian floating fern known in some circles as a "lake killer."

"Under optimal growing conditions, it actually reaches an 80 percent growth rate per day," Sanders said. "At that rate, it doubles in size every day and a half."

The invasive water plant was first spotted in Louisiana in 1998, at Toledo Bend Reservoir on the Texas-Louisiana state line.

At the time, giant salvinia was a popular plant for water gardens. Sanders said the speculation is that some homeowner grew tired of its habit of taking over the water and just scooped the stuff out and threw it in a ditch.

The state banned the sale of giant salvinia soon after it was discovered in the wild, Sanders said, "but by then, it was too late."

The first major infestation was estimated at 400 acres. By 2010, the weed, which moves easily from lake to lake on boat trailers, had expanded into waterways throughout the state and covered more than 70,000 acres, according to figures from the LSU AgCenter.

Just last year, giant salvinia began taking over the southwest Louisiana ponds and marshes that have served as prime hunting grounds for waterfowl.

"It has destroyed duck leases," Sanders said. "The ducks don't land because there is no open water."

An imported salvinia-eating weevil has been used with success in recent years to control the weed in south Louisiana, but the colder weather in north Louisiana tends to kill the temperature-sensitive insects.

At Lake Bistineau, which spreads out across 17,000 acres in Webster, Bossier and Bienville parishes, the locals have been fighting the weed for about seven years, with little success.

Peter Camp, who owns property on the lake and serves on a salvinia task force, said the invasive plant was so thick one year that he couldn't even see the lake when gazing out from his camp.

Sanders said research is underway to develop a cold-tolerant weevil, which seems the only effective and economical way to manage the plant.

Chemical treatments can be used to fight giant salvinia and other invasive water plants, but the special herbicides that are designed to kill invasive aquatic plants without killing everything else can be expensive.

The state Department of Wildlife and Fisheries has spent from $7 million to $8 million a year for the past five years on spraying invasive water weeds, a figure that had been below $3 million a year before giant salvinia began its rapidly expansion.

Massimi, with the Barataria-Terrebonne National Estuary Program, said he prefers weevils and other so-called biological control agents whenever possible because it re-establishes a natural system of checks and balances that controls native species in their native habitat.

"We have had nightmare scenarios in the past of people introducing something willy-nilly," Massimi said, citing, for example, the cane toads in Australia.

The toad, a native to Central and South America, was exported in the 1930s to fight a beetle eating the sugarcane crop in Australia.

The problem is that the toads consume just about anything and produce a toxin that can kill predators that eat them.

Massimi said modern-day researchers are keenly aware of the potential hazards of using exotic plants, animals or insects as a form of biological control.

"These days we do things quite a bit differently," he said. "We study them in a lab, sometimes for decades, to make sure they are target-specific."

Where imported insects can't be found to eat a particular invasive species, there is always the native Louisiana human — a species with a diet known to include alligators, crawfish, squirrels and frogs.

"There is always a percentage of customers who will try something new," said Baton Rouge Chef Philippe Parola, who has been working with the state on a campaign to put Asian carp on dinner tables across the state.

Asian carp is a label generally applied to the invasive silver carp and bighead carp that have spread throughout much of the Mississippi River system and are becoming more common in other waterways across Louisiana.

The giant fish were originally brought to the U.S. from China in the 1970s to help keep clean the ponds at fish farms, and the carp have made headlines in recent years for their bizarre trait of jumping several feet out of the water when boats approach, sometimes injuring boaters or skiers who slam into the fish, which generally range from 20 to 40 pounds.

"It's a matter of time before somebody is going to get hurt," said Sherbin Collette, a longtime commercial fisherman in the Atchafalaya Basin who also serves as mayor of Henderson, a small town at the edge of the swamp. "The head of this fish is like a brick."

Beyond the potential injuries to boaters, the giant filter-feeding fish are a threat in the wild because they can eat so much plankton that little is left for other aquatic life.

A THREAT TO NATIVE SPECIES

A common problem of invasive species is their appetites are so large that native species can go hungry. That concern has also arisen with the recent arrival in Gulf waters of Asian tiger prawns, which grow up to 14 inches long, dwarfing the native brown and white shrimp.

"The main concerns with most invasives, especially tiger shrimp, is that they compete for resources with our natives. There is only so much food out there," said Wildlife and Fisheries biologist Robert Bourgeois.

The giant prawns were first documented in Louisiana in 2007. Bourgeois said it is too early to know whether they will cause a serious problem or, like some exotic species, integrate into the local ecosystem without causing major disruptions.

Asian carp, though, are firmly set in. Parola believes he can beat the carp at its own game — that is, consume enough carp to keep it from consuming too much plankton.

"The only sustainable solution to preserve our ecosystem is to eat this fish," Parola said.

But there are issues.

For one, carp is a name that likely doesn't sound too tempting to most Americans, so Parola has pushed to market the fish under the name "silverfin."

The invasive carp is also bony and requires substantial processing. Once deboned, the carp can hold its own against other popular fish, Parola said.

"For everybody who has tasted it so far, it has been 100 percent satisfaction," Parola said.

The main obstacle is public perception and awareness, he said, and any effort to introduce a major new food source requires substantial marketing.

Parola was also involved in a 1990s state campaign to promote nutria as a menu item, a promotion he said saw little success in part because stringent federal regulations on processing the meat made it impossible to create a viable commercial market.

The rodent's reputation and appearance — the rat-like creature has large orange, buck teeth — might have also been an issue, said Edmond Mouton, who oversees the Wildlife and Fisheries nutria control program.

"A lot of people ate it and liked it, but was it was not something they would order at a restaurant," Mouton said. "If it had looked like a rabbit, it might have been a bit more appetizing."

But Mouton said the state seems to have more success with an incentive program that pays trappers a $5-per-tail bounty on nutria. Since it began in 2002, trappers have caught nearly 3.6 million nutria, averaging about 325,000 a year, according to figures from Wildlife and Fisheries.

In the same period, aerial surveys show declining amounts of marsh damage attributed to nutria, from 21,185 acres in 2002 to 1,233 acres this year.

It's difficult to know for certain how much impact the nutria harvest has had on wetland damage — other factors could be at play — but the incentive program for trappers is widely regarded as a success.

If hunting and trapping has had some impact on the nutria population, it seems to have had little effect on feral hogs, an animal with a population that seems to be expanding despite the popularity of pork and of hog hunting.

Hogs were brought to North America by the Spanish in the 1500s, but their population in the wild seems to have really taken off in recent decades, said Donald Locascio, a biologist with Wildlife and Fisheries.

He speculated the spread might be linked to the growing popularity of hunting the animals, which has prompted some landowners to move wild hogs onto their land for game.

"They are tasty and they are fun to hunt, but they are not something you want on your property," he said.

Hogs destroy land by rooting it up and out-compete deer and other wildlife for food, eating anything and everything, including crops, seedlings in a forest and the food plots of hunters.

Locascio said controlling the spread of wild hogs is almost impossible because they reproduce quickly, have no real predators and are smart enough to avoid traps and heavily hunted areas.

"We sure aren't going to get rid of them, and I don't know if we can control them," he said.

Information from: The Advocate, http://theadvocate.com