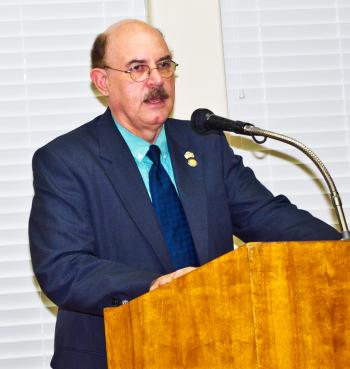 Rep. Sam Jones gave his legislative report to the Franklin City Council Tuesday.
Jones, D-Franklin, represents Dist. 50 in the Louisiana House of Representatives.
It was a session dominated by financial woes, but Jones said the budget was balanced despite a $1.6 billion deficit.
“Cheaper gas prices and those things brought some costs down,” Jones said, helping the balancing project in the $25 billion budget.
He said $700,000 in “real cuts that will impact all state operations.” Jones did not support a measure, that did pass the legislature, which he said, “comes down to counterfeiting. Don’t do it in your business because you will go to jail. Students going to college will find they have a $1,600 fee assessed to them that they don’t have to pay because they will get a credit from the state that they cannot keep, to pay an amount of money to the colleges that they don’t qualify for because they’re not-for-profits. This created $350 million of paper money, Monopoly money, and was never real dollars.”
Among revenue measures was an increase of 50 cents per pack on cigarettes and the tax-free status on some industries that will now pay one cent for one year.
Locally, Franklin and the surrounding area fared well, Jones said, including:
—$20,000 for the Franklin Main Street Program for façade rehab.
—$30,000 for structural repairs for buildings in the historic district.
—$50,000 for City Hall or the old Crowell Elementary Gym, which the city now owns and will be occupied by St. Mary Council on Aging, or the Center Theater.
—$10,000 to the Franklin Historic District for development and promotion.
—$10,000 for Brittany’s Project.
—$20,000 from Louisiana Governmental Assistance Program funds for a police cruiser.
—$5,000 to Techeland Arts Council.
—$10,000 to the Bayou Teche Bear Festival and $5,000 to the Harvest Moon Festival.
—$7,500 for Franklin Main Street business promotion.
—$20,000 for St. Mary Landmarks Society properties.
—$35,000 for construction of a wooden boat wharf.
—$15,000 for the Keep St. Mary Beautiful program.
—$15,000 for commemoration of the five military encounters in St. Mary Parish during the Civil War.
—$1.65 million for a welding school on West St. Mary Port property in capital outlay process.
—$49,000 to weatherproof the tourist commission building on US 90.
—$760,000 to overlay Chitimacha Trail from Adeline to Charenton.
—$5 million to overlay La. 87 from Charenton to Oaklawn was funded last year and is in progress, as is a $4 million overlay of La. 182 from Jeanerette to Adeline.
He said he did not vote for raising the vehicle title fee or the inventory tax.
In other business Tuesday, the council introduced ordinances declaring surplus property and authorizing the sale of that property, and to amend the capital outlay budget for 2015-2020.
Resolutions were passed authorizing use of the Armory Building at City Park for the USA Bayou Wrestling Anaconda’s program June 1-May 31.
Louisiana DOTD announced that the Franklin Canal Bridge will be closed July 6-26.