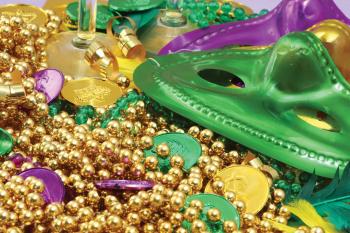 NEW ORLEANS (AP) — A brass band strolled through a riverside warehouse holding huge, colorful parade floats as New Orleans Mayor Mitch Landrieu and other city officials Tuesday kicked off the city’s official countdown to Mardi Gras.
“Everybody knows that this is what we live for,” Landrieu said during the event at Mardi Gras World, where many of the floats used in the yearly Carnival season processions are stored. Officials took part in the ceremonial slicing of a King Cake, a traditional seasonal treat. It all took place amid tables laden with beads and trinkets that float riders toss to parade watchers.
“Nobody handles the business of joy better than the city of New Orleans,” said Landrieu.
Later, a group of masked revelers called the Phorty Phunny Phellows took their annual “Twelfth Night” streetcar ride through town, a decades-old tradition marking the 12th night after Christmas and the official start of the season.
Carnival is celebrated along the Gulf Coast with parties, balls and parades culminating on Mardi Gras, or Fat Tuesday, a final day of celebration before the solemnity of Ash Wednesday and Lent. Mardi Gras falls on Feb. 17 this year.
In addition to being a tradition for residents, Carnival season is a major tourist draw in New Orleans, especially in the final two weekends when the best-known parades roll, often with local and national celebrities aboard the floats. It’s a major factor in the city’s $6 billion tourism economy, along with the annual Jazz and Heritage Festival, the Essence Festival and other major cultural and sporting events.