Mark Stephens retiring after 30 years as a firefighter 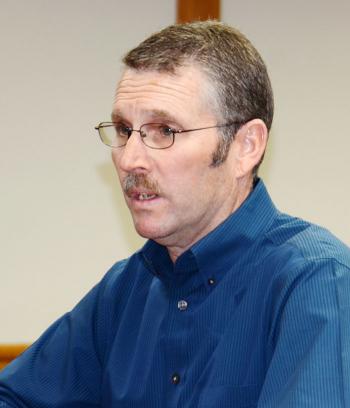 For the third time in the past couple of years, a Morgan City firefighter is retiring with three decades of service to the Morgan City Fire Department.
Monday was Assistant Fire Chief Mark Stephens’ last day in the office, and he will officially retire Nov. 1 after using vacation days he has accumulated during his career. Stephens, 50, a Morgan City native, has worked for the Morgan City Fire Department for 30 years.
He had served as assistant chief for fire prevention since 2006. Throughout his career, he moved up the ranks from fireman to operator to captain to assistant chief. After former Fire Chief Morris Price retired in November 2014 with 33 years of service, Stephens served as substitute chief for seven months until the mayor and City Council appointed Alvin Cockerham as chief.
Stephens then went back to assistant for several months before retiring.
Price’s brother, Charlie Price, retired in July 2013 as a captain with the department, also having spent 33 years as a firefighter.
Stephens got to work alongside family members at the fire department, too.
Stephens’ son, Reed Stephens, and his son-in-law, Daniel Clemons, both work at the Morgan City Fire Department. Stephens’ uncle, Arnold Boudreaux, served as an assistant fire chief at one time.
Growing up, Stephens had other aspirations than becoming a firefighter, he said. He enjoyed learning about law and politics and liked helping people. Stephens also thought about becoming a State Police trooper.
He attended Nicholls State for a little while and worked in the oilfield for a short time as well.
The most rewarding time in his 30 years as a firefighter was getting to serve as substitute fire chief, Stephens said. Among the biggest challenges Stephens has faced include ensuring the department stayed up to date with the latest in firefighter education, he said.
Morgan City has excellent firefighters and good equipment for those firefighters to use, he said.
Firefighters are required to meet a certain number of hours of training each year, Stephens said. Morgan City firefighters train at LSU’s firefighting academy.
Firefighting technology has drastically improved over the past 30 years, and firefighters have many more tools at their disposal, he said.
Morgan City is fortunate to have a fully paid fire department, which gives firefighters the ability to respond quickly to fires with enough personnel in a profession where minutes can often make a big difference, he said. The department has four fire stations around the city.
Stephens believes, for its size, the Morgan City Fire Department is “one of the better fire departments” in the state. The department has a total of 39 paid firefighters and office staff. Additionally, Morgan City has volunteer firefighters who help with vehicle extrication.
Many communities rely solely on volunteer fire departments, and years ago, all fire departments started out as volunteer organizations, Stephens said. Morgan City assists 10 other fire departments in St. Mary Parish.
“There’s not many communities that have a paid department like ours,” he said.
Stephens is confident that the department will continue to do well with the well-trained firefighters it has and the young firefighters who will become good leaders, he said.
In his retirement, Stephens wants to stay active and busy. He plans to get more involved with the St. Mary Chamber of Commerce and also assist with city events, he said. Stephens has helped organize the Bayou BBQ Bash the past few years. In addition to those activities, Stephens wants to help with his son’s lawn care business.

This story was written by Zachary Fitzgerald of The Daily Review staff. Reach him at zfitzgerald@daily-review.com.