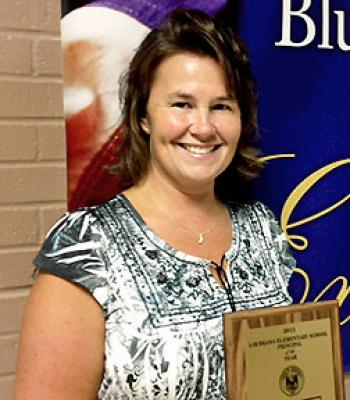 Patterson, La.
By JEAN L. KAESS
jkaess@daily-review.com
Niki Fryou, Hattie Watts Elementary principal, was named to the 2013 class of National Distinguished Principals.
The program “honors elementary and middle school principals across the nation whose contributions inspire children to reach farther and higher, to build a brighter future and a better world,” according to the National Association of Elementary School Principals website.
Each year, the association awards principals across the nation for their exemplary achievements. Fryou is the lone recipient from Louisiana.
The 2013 National Distinguished Principals Program will be held in Washington, D.C., Oct. 24 and 25.
This is not the first award for Fryou or Hattie Watts.
Fryou was named the 2013 Louisiana Elementary School Principal of the Year.
Hattie Watts was selected as a U.S. Department of Education Blue Ribbon School during the preceding school year for being a high performing school with at least a 40 percent disadvantaged population. The school held a B-rating, and was one of only 305 in the nation chosen.
Hattie Watts earned the honor as a High Poverty High Performing school several years and was named a National Blue Ribbon School for 2011.
Fryou moved to Louisiana from Indiana, 12 hours from family and friends, to begin her career in education in 1991. After teaching elementary grades for seven years, she taught math at the middle school level for two years before moving to the Central Office Complex in Centerville as a DEEP math facilitator and staff developer for six years.
In 2006, she was assigned to Hattie Watts as the assistant principal. One year later, she moved into the role of principal.
Superintendent Donald Aguillard said Fryou “engages daily in efforts to inspire children to reach farther and higher. Her principal leadership skills have galvanized the Hattie Watts professional learning community into an instructional team committed to building the brightest possible future for the children of Patterson,” he said.
“I speak for all St. Mary Parish School Board employees when I extend my sincere congratulations to Mrs. Fryou for having been selected as a 2013 National Distinguished Principal,” Aguillard said.