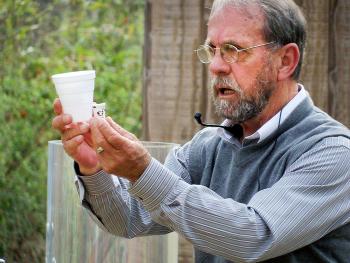 Ken Stage, owner of the St. George Observatory in Schriever, is shown demonstrating what happens to an 8-ounce Styrofoam cup when it is submerged to a depth of nearly 7,000 feet in the Gulf of Mexico.
(Submitted Photo)

Ken Stage and his wife, Faye, both of the St. George Observatory, recently received the Astronomy Outreach Award as part of the “Astro Oscars,” Ken Stage, owner of the St. George Observatory said.
Stage said the award was unexpected. The observatory is the only one in south Louisiana, and is a place where children can learn about the universe, chemistry, physics, biology and math, he said.
At first, Stage did not understand the significance of the award until people he knew from across the country told him the award was a big deal, he said.
He was told the award is akin to getting a Grammy or Pulitzer Prize, Stage said. The award recognizes the best in astronomy public outreach and astronomy education, according to astronomyoutreach.net.
Stage found out about the award last week, and looked over past winners of the award. “They put me in the same league as Dr. Story Musgrave. He’s a shuttle astronaut. He’s the one that repaired the Hubble Space telescope in 1993,” Stage said.
Other winners included David Levy, who discovered a comet that crashed into Jupiter; Jack Horkheimer, who hosted a PBS special about the universe; and John Dobson, who designed the Dobsonian Telescope, Stage said.
Stage opened the observatory in 1999 on a limited basis and then took it to the level the observatory is at now in 2003, he said. “Prior to that I was having school groups come out and scouts just to show them what they could see in the universe with the telescopes,” he said.
The St. George Observatory is located at 540 St. George Road in Schriever, and all visits are by appointment only. The observatory’s phone number is 985-448-1934. Admission is $9 per student/senior, $10 per adult and $15 per overnight camper, according to its website.