Patterson gets ready for school by 'stuffing the bus' 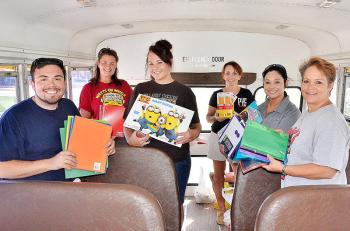 PATTERSON — With the school year just around the corner this week, multiple school-themed events were held Saturday in the city of Patterson.
Saturday morning, from 8 a.m. until 11 a.m., the annual “Stuff the Bus” event was held at Family Dollar, while later in the day, from 1 p.m. until 4 p.m., the Kenny Hilliard Foundation held a Back to School Fun Day at Cherry Street Park.
“Stuff the Bus,” sponsored by the City of Patterson along with Hattie Watts, Patterson Junior High and Patterson High, is in its fourth year, Hattie Watts Principal Niki Fryou said.
“The purpose is just to get kids excited for school so they hear about it, and then people bring supplies for all three schools so that we can help those less fortunate children,” Fryou said.
Additionally, the drive helps out by replenishing items that may be exhausted during the school year.
“This probably touches and helps throughout the school year probably 250 kids,” Fryou estimated of the benefit on her school “Stuff the Bus” has.
Fryou said her school also asks for socks and underwear because many times when students have accidents, parents can’t leave work, and this enables to school to take care of the problem and students don’t miss classroom time while waiting for parents in the school’s office.
For Patterson Junior High, Assistant Principal Tara Fabre said the drive helps her school a good deal as well.
“It helps a lot, especially like when kids come in from other districts and they don’t have the supplies, or sometimes we have homeless children that can’t afford things like that,” she said.
In those cases, the school is able to draw from this inventory and provide the students with these needs.
She estimated the impact in a given year supplies benefit were at least 20 students.
Mamie Perry, Patterson High School dance team sponsor and color guard instructor, was at the event with her dance team Saturday.
She said the event had gone well.
“It’s a wonderful, beautiful day,” Perry said. “The girls are just excited to be with the community. We’re very appreciative of anything we can get. Even with school supplies, certain things, it’s still not enough, especially with the economy. ... We’ll just take anything and are appreciative of it all.”
Other groups in attendance included the Patterson Junior High Dance Team and the school’s junior high cheerleaders as well as faculty and staff from all three schools.
Patterson High Secretary Ellen Lemoine said that while it’s difficult to measure how many students the supplies benefit because as they are needed for a class or student, they are retrieved from the school’s extra supplies, she said that all of them are used. She expressed appreciation on behalf of the students and faculty for the support from the community.
If community members could not attend Saturday’s event and would still like to donate to the schools, they can bring their donations to the school offices.
Ryan Aucoin, director of Community Development for the City of Patterson, said that the city always wants to partner with the school system to help students because they represent the city’s future.
“We want to make sure that the future is as bright as it can be,” Aucoin said.
Later Saturday at the Hilliard event, youngsters enjoyed inflatables while food and drinks were served as well.
The Kenny Hilliard Foundation invited Amber Grogan and “It’s a Family Affair” foundation to give out multiple items including school supplies and school uniforms.
The event is the first for the foundation, whose namesake is ex-Patterson High and LSU football player and current Houston Texan Kenny Hilliard. Hilliard is currently in training camp and could not attend Saturday’s event.
“Mainly his focus was just to kind of give back to the City of Patterson, but mainly to the children,” Tassel Hilliard said of her brother’s event. “The foundation is actually pretty much about encouraging children, uplifting them, kind of motivating them, and we really just want to give them something to do before they go back to school.”
The event featured a fun jump and a water slide as well as food and drinks.
Event sponsors included Advanced Physical Therapy and Rehabilitation Service and Frank’s Agency.

This story was written by Geoff Stoute of The Daily Review staff. Reach him at gstoute@daily-review.com.