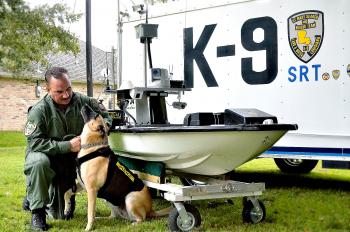 We have had 16 body finds from here to Orange, Texas, in the past five years, captured robbery suspects and found pounds of narcotics.
Patterson, La.
By PRESTON GILL pgill@daily-review.com
A reserve Patterson K-9 police officer has turned his skills with his dog and with electronics into a service law enforcement agencies are using throughout south Louisiana and into Texas.
Irvin Chauvin of Bayou Vista owns Bella, a 5-year-old Belgian Malinois that is trained in locating narcotics, tracking and cadaver search.
Chauvin has participated in several cases attempting to locate victims, including being asked to assist in the high-profile Michaela “Mickey” Shunick search, he said. Shunick was missing three months before her body was located Aug. 7, 2012, in Evangeline Parish.
“We have had 16 body finds from here to Orange, Texas, in the past five years, captured robbery suspects and found pounds of narcotics,” Chauvin said. Bella has assisted multiple agencies in making finds of cocaine, narcotics and marijuana, he said.
Chauvin’s assistance goes beyond his work with Bella to include an application of technology in searching for anything, but especially bodies, hidden underwater.
Chauvin is working on the fifth prototype of a remote-controlled search and rescue amphibious device. The device is a modified fiberglass boat hull rigged with sonar, radar, GPS, cameras and audio devices. He formed St. Mary K-9 Search and Rescue to facilitate making his inventions and dog available to law enforcement agencies.
After tinkering with the first prototype of his amphibious device, he was given the opportunity to utilize it in a real-world situation in a July 2011 search for Dale LeFleur of Port Barre. The 6-foot boat probed the murky waters of Bayou Courtableau in St. Landry Parish.
Chauvin shows a news story two years later that mentions another remote-controlled, 6-foot boat outfitted with sonar being used by the St. Landry Parish Sheriff’s Office.
“They copied my boat,” Chauvin said.
Chauvin’s wife, Tammy, works with him in his Bayou Vista communications shop. They install radios, lights and communications for the police departments for municipalities in the parish.
Tammy Chauvin said, “They save manpower; you can keep them on the water for long periods of time and you don’t have to stop at night.”
The devices are a complement to dogs that can tire, she said.
Chauvin has disassembled his first prototype and worked with larger hulls and added more equipment in succeeding prototypes. The most recent is an 8-foot, 8-inch boat with more and improved electronics.
Morgan City Police Chief Travis Crouch said he has seen the amphibious device tested and was impressed.
“This is a great tool for law enforcement,” Crouch said.
Crouch said when Chauvin has prototype 5 ready, the Morgan City Police Department will take it out for test runs searching for “some stuff that was lost years ago.” Crouch declined to reveal what the items were, but said they are not significant items. The search will be more of a test run that demonstrates the device’s abilities.
“He has been an asset to us in the past,” Crouch said of Chauvin. “This is a very good local resource we will tap, no doubt about it.”
Patterson Police Chief Patrick LaSalle praised Chauvin’s commitment to law enforcement and his intuitive ability to match electronic applications to the needs of law enforcement agencies.
“Irving always wants to help and he is always coming up with an idea on how something can be done with electronics and how it can be improved,” LaSalle said.
Chauvin said prototype 5 will utilize two connected 12-volt batteries to power the boat’s attached trolling motor and all of its electronics and safety lighting. It has three onboard digital video cameras that can broadcast real time imagery and a fourth camera which is submersible by cable to depths of 85 feet. The range of the camera view is limited only by the visibility of the water.
Sonar is combined with the cameras to give a three-dimensional view of what is underwater, Chauvin said. Water temperature and depth are recorded and the attached GPS is able to record location. He has tested the remote control of the device one-quarter of a mile and plans to make a test run across Lake Palourde within a few days.
Making a find or hit is not always the goal of the equipment. It can quickly “clear an area” to rule it out and allow law enforcement to focus on other areas, Chauvin explained.
Chauvin’s goal is to design and construct an amphibious device that can be deployed anywhere in the world and be remotely controlled by satellite uplink from a single control room which monitors the device on a computer screen while it sends real time imagery back to law enforcement and rescue teams.
While discussing prototype 5 in his office, Chauvin had a canvass draped over another device. He pulled back the canvass to reveal a 3-foot by 2-foot remote-operated land vehicle that looks like a futuristic miniature dune buggy. When completed, the prototype 2 land vehicle will be equipped with a metal detector, chemical and natural gas detection equipment along with camera and video. The vehicle could have innumerable applications commercially in addition to law enforcement, he said.