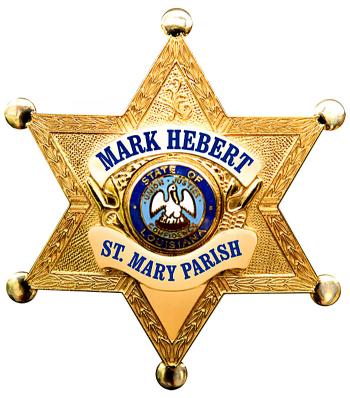 The St. Mary Parish Sheriff’s Office is requesting public approval on Saturday’s ballot to levy a half-cent sales tax to maintain the level of service it provides, Sheriff Mark Hebert said.
The tax would increase the parish tax rate from 4 percent to 4.5 percent in all areas except Morgan City where it would increase from 4.3 percent to 4.8 percent, Jeff LaGrange, parish sales and use tax director, said.
Hebert said the sheriff’s office borrowed about $1.5 million each of the last two years from the state bond commission and varying amounts for the remaining six out of the last 10 years to fuel operational expenses.
The department’s annual budget is $14 million, and the sales tax is expected to raise about $5 million each year in additional funds, Chief Deputy Lonnie LaBouve told the St. Mary Industrial Group in November.
The sheriff said 73 percent of the budget goes to staffing costs.
LaBouve said staffing has been reduced from 210 to 170.
“It takes a lot of people to do what we do,” he said.
Efforts to contain costs included streamlining personnel costs, training locally as opposed to officers traveling to attend classes regionally and closing the seventh floor jail at the St. Mary Courthouse, Hebert said.
“We’ve really, really looked at streamlining before we tried to go forward with a plan like this,” Hebert said.
Costs have increased though. He said new software has been necessary to “give officers tools to be efficient at what they do.” For example, fuel costs have increased for the fleet of about 100 vehicles the department maintains, and officers need equipment to stay ahead of 21st century crimes like identity theft and other cybercrimes, the sheriff said.
LaBouve said since 1997, several federal and state mandates have been implemented, including the Prison Rape Elimination Act. With PREA, you have to have people with certain skill sets.
The state has mandates relating to the work release program, he said. The sheriff’s office had to start adding more employees just to keep up with those programs, LaBouve said.
The state is trying to get out of the jail business and place that responsibility on sheriff’s departments, LaBouve said. State officials will call the sheriff’s office on a weekly basis to see if the jail is over capacity. “If we’re five over our maximum count, they’ll come in and take five of our best inmates,” LaBouve said.
“We’ll call that basically our trustees that we want to put in a work release program,” he said. “They (the state) will take them so they can put them in a program.”
The sheriff’s office is left with the sick inmates and trouble inmates when the state comes and takes inmates out of the parish jail, he said. “Every time we lose these state inmates, our revenue sources go down,” he said.
The department’s revenue sources come from sales taxes, ad valorem taxes and fees, he said. Operation costs are the lowest they’ve been in 4 years, he said.
Hebert said, the fact is, “nobody is operating on a business plan they put in place 17 years ago,” he added.
A ½-cent sales tax dedicated to law enforcement approved by voters in 1997 was the last time a dedicated law enforcement tax was approved. Of that, ¼ cent goes to the sheriff’s department and the remaining ¼ cent is divided between the municipalities. Hebert said he spoke to the various municipalities, and they said they were OK with the money they receive currently.
LaGrange, the tax director, said a ½-cent sales tax will cost consumers about five cents for every $10 spent.