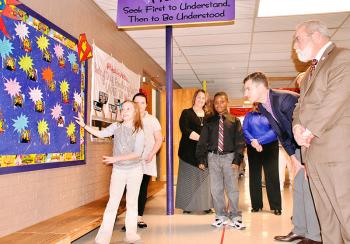 McKenzie Percle, Lillian Breaux and Elijah Charlot, students at Hattie Watts Elementary were tour guides Monday during the visit of the State Superintendent of Schools John White, who is leaning forward. At right is state Sen. Bret Allain, R-Franklin.
(The Daily Review Photo by Crystal Thielepape)

State Superintendent of Schools John White spent several hours visiting Hattie Watts Elementary on Monday.
This was the first time since he became superintendent in 2012 that White has visited a St. Mary Parish public school, and only the second time in a decade that any state superintendent has visited a school in the parish, St. Mary Superintendent Donald Aguillard said.
White toured the school with Sen. Bret Allain, R-Franklin, and Rep. Sam Jones, D-Franklin; parish education leaders, school administrators, teachers and students. Those students demonstrated and explained the seven habits they have been embracing as part of the “Leader in Me” program.
New to the school this year, Hattie Watts incorporated a program based on Stephen Covey’s “The Seven Habits of Highly Effective People.”
Niki Fryou, Hattie Watts principal, told White the community raised the $30,000 needed to fund the first year. The program is three years and will cost $80,000 when complete.
Leader in Me touts itself as producing results such as higher academic achievement, fewer discipline problems and increased engagement among parents and teachers as well as equipping students with the self-confidence and skills they will need to thrive as adults.
“I think it’s important we measure how well our kids read, write and do math, and I think our kids are just as smart in St. Mary Parish as they are anywhere in America. I think our kids deserve a chance to show that, but I don’t think you can measure leadership on a bubble test. I don’t think you can measure character on a bubble test, and I don’t think you can measure love for your fellow human beings on a bubble test,” White said.
A selection of students showed their “data binders” to the guests. Those binders are a place where students keep graphic representations of their grades, conduct and numerous other indicators. Seeing them daily keeps the children motivated and on task, Fryou said.
“The academics are coming. They’re having pride when they make that A, and they get to color in that square … even when they see a little dip, it makes them work a little harder. That’s what we’re finding — it’s got to come from within,” Fryou said.
Allain said he was impressed with the work being done at Hattie Watts.
“This re-centering on leadership and quality of work, putting first things first, we see all the time your product that turns out and goes to work. Our number one complaint from business is kids today don’t have soft skills,” Allain said.
Those so-called “soft skills” include showing up to work on time and absentee reduction.
“I think you are re-centering on a lot of the soft skills, and, with that I think, academics come,” Allain said.
Jones said the self-esteem students gain makes them a whole package.
“Now that you’ve visited one of our schools,” Jones told White, “I’m sure you understand why I fight with the passion that I do to defend the teachers and this administration. … I think there are certain things that you saw here today that are not going to be measured on a test,” Jones said.