Traffic near Cameron to be studied 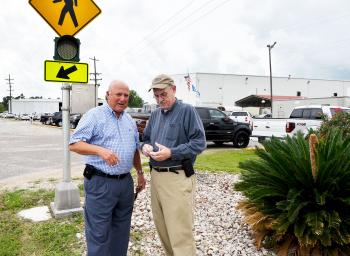 Berwick Mayor Louis Ratcliff and state Rep. Sam Jones, D-Franklin, met with a reporter at Cameron on La. 182 where a traffic light is proposed.
(The Daily Review Photo by Preston Gill)

A traffic study will determine if traffic signal or even an underground pedestrian walkway is put on La. 182 at Cameron, according to state Rep. Sam Jones, D-Franklin.
Jones pushed through legislation in Baton Rouge this past session to put a traffic control signal where hundreds of people enter and exit the company’s parking.
Highway department head Sherri LeBas met with company officials, Jones and Berwick Mayor Louis Ratcliff Monday to discuss what needs to be done in order to make the highway safe for motorists and workers.
“We are looking for the best solution … and a signal might not solve all of the problems there,” LeBas said. “We need to look at how much traffic goes through there and consider how expansion and other growth will affect the traffic.”
Jones’ legislation, signed by Gov. Bobby Jindal on June 19, calls for the Department of Transportation and Development to put in a traffic control signal at La. 182 and Friendship Drive. No time frame to install a control signal was given, but the act’s effective date is Aug. 1.
LeBas suggested that in order to arrive at the best solution to the problem, a traffic study should be done and Cameron agreed to contract with a firm to get that done, Jones said.
Jones said the meeting was “really good” and expects the study will be completed by the end of the year.
“The secretary (LeBas) asked that an underground walkway be seriously considered, which I think is a viable alternative,” Jones said. While an overhead walkway might be considered, it is not practicable because of the height at which it would need to be built in order not to obstruct the movement of equipment and passage of trucks down the highway, he said.
Ratcliff said it is his understanding such a walkway would be funded by Cameron unless money can be obtained from the state.
Jones said he would consider it his obligation to help Cameron get state funding if a walkway is constructed.
State Sen. Bret Allain, R-Franklin, said he was unable to be at the Monday meeting, but is aware of the safety issues on the highway for workers and the public.
Allain said he does not know enough details on costs and benefits associated with an underground walkway to comment on it, but in general he wants to continue his commitment to economic growth in the parish as well as do what it takes to ensure the safety of people traveling along or across the highways.
Ratcliff said the number of pedestrians who must cross the street from the parking lot poses not just an inconvenience for drivers yielding to them in the crosswalk, but also to the safety of hundreds of people every day. Trucks turning both ways off the highway often must stop and wait extended periods of time in order to complete their turn, he said.
At Monday’s meeting, participants discussed how congestion will increase as Cameron begins an expansion in the fall, which Jones said will add a couple hundred more workers. In addition to the expected Cameron expansion, consideration and planning should be given to other future growth there along the highway, he said.
“There are traffic and pedestrian issues currently at this location that will only get worse with future growth and we need to address them right now,” Jones said.
Erik Lind, vice president of G&J Land & Marine Food Distributors Inc. in Morgan City, said while no definitive decision has been made, his company is considering a Berwick operation sometime in the future.
“G&J is currently in feasibility and final planning of a new facility adjacent to Cameron south of La. 182,” Lind said in an email. “Timing of construction is expected within the next five years.”
Whatever decision is made after the traffic study is completed, safety of workers, residents and motorists is the paramount issue, Ratcliff said.
DOTD spokeswoman Deidra Druilhet said several traffic studies along La. 182 have been done.
La. 182 at Pattie Drive was studied for pedestrian signal heads in 2011 and a speed study was conducted at Cameron in 2013. The location also is being studied for the installation of a flashing beacon, Druilhet wrote in an email.
La. 182 at Tournament Boulevard is being studied to replace the flashing beacon with a traffic signal and a speed study is under way for La. 182 at Southeast Boulevard, she wrote.