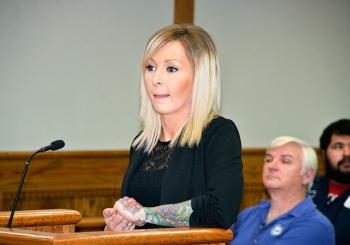 Several members of the public asked for a repeal of the city’s ban on pit bulls and a lessening of restrictions on Rottweilers in the city during Tuesday’s City Council meeting.
Aimee Monnin brought a proposal before the council to amend the city’s vicious dog ordinance, which went into effect in 2006. Monnin is a resident of Ricohoc and owns a business in Morgan City.
Monnin asked to repeal the city’s pit bull ban and to lessen the restrictions to own a Rottweiler, she said. The ordinance is motivated by fear and lack of relevant knowledge, Monnin said.
Mayor Frank “Boo” Grizzaffi provided The Daily Review with the proposed ordinance changes that Monnin gave to the council.
In the proposed changes to the ordinance, Monnin said, “Once any dog has been deemed vicious following an incident that inflicts injury upon a person or animal, the owner shall be subject to a large fine.”
The owner of any dog deemed vicious would need to muzzle the dog while in public or outside, she said. Owners would also be required to carry a $100,000 insurance policy on vicious dogs, she said. The “one-bite policy” will result in confiscation and or euthanization of a vicious animal upon a second bite incident in addition to fines to the owner, she said. The policy would apply to any dog that is deemed vicious, Monnin said.
Councilman James Fontenot said allowing a one-bite policy instead of a no-bite policy is a difficult amendment for residents to accept.
In the proposed amendments to the ordinance, Monnin suggested pit bulls should be kept confined within a 6-foot chain link fence, and when not accompanied by owners, must be confined to a 6-foot chain link enclosure/kennel. Also, a photo and address of a particular pit bull must be sent to local law enforcement, she said.
Rottweilers should also be kept inside a 6-foot chain link or wood fence, she said. Appropriate signage should be displayed warning people of the presence of both Rottweilers and pit bulls, Monnin said.
Sherrie Schahn, of Morgan City, said she came to a meeting in 2006 to discuss the city’s ban on pit bulls. She did everything she had to do to keep her pit bull, which was grandfathered in, but still felt harassed, Schahn said. Schahn’s pit bull recently passed away, she said.
Schahn said she felt harassed by the city’s dogcatcher because Schahn could not get the insurance required. No insurers in Louisiana cover insurance for pit bulls, Schahn said.
The few Rottweiler owners in the city are forced to carry expensive insurance policies on the pets and are required to muzzle the dogs while being walked, Monnin said.
Misty Pierce, of Morgan City, has one of the few registered Rottweilers in the city, she said. Her Rottweiler is about 130 pounds, and is “a big lap dog,” Pierce said. She also fosters other animals for area animal shelters, she said. Pierce has to have the $100,000 liability policy, she said. Her Rottweiler loves everyone and has never had behavioral issues, she said.
The muzzle that Pierce’s Rottweiler is required to wear in public causes people not to approach the dog even though the dog is not at all vicious, Pierce said.
Monnin said the city’s ordinance is in conflict with Louisiana state law by enacting breed discrimination legislation. These types of ordinances also infringe on fundamental property rights guaranteed under the constitution, she said.
“This legislation fails to enhance public safety because it has shown that it does not reduce the number of dog bites,” Monnin said. Monnin believes people are hiding numerous pit bulls in the city for fear of the dogs being killed, she said. “Most of these dogs are being humanely controlled by responsible owners,” Monnin said. “We feel like they should be able to have the same rights as other dog owners.”
A mistaken perception exists that targeting dogs by appearance is a simple solution to a complex issue, Monnin said. Breed discriminatory laws are based on feelings, not facts, she said. “We need to have an honest conversation about what needs to be done to promote public safety in our community,” Monnin said. People need to be educated on responsible dog ownership including spaying and neutering, vaccinating and safely controlling large dogs, Monnin said.
The council will have the chance to determine if any changes are needed to the ordinance, Grizzaffi said. The mayor also provided the council with some similar ordinances in nearby communities for research purposes, he said.