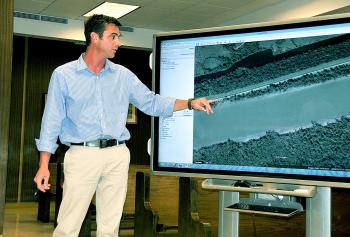 We think this is one of those items that the quicker we can get on this, it may be one of those things we can take care of the problem before it actually becomes an official problem.
Franklin, La.

By ZACHARY FITZGERALD
zfitzgerald@daily-review.com
St. Mary Parish Levee District officials continue to move forward on design work to certify the Wax Lake East levees for 100-year storm protection.
The Wax Lake East levees protect Patterson, Bayou Vista and Berwick.
The levee district commission approved Reid Miller of Miller Engineers to do permitting, design work, and construction oversight on “rehabbing” the southern stretch of the Wax Lake East levees. The stretch is about 2,700-feet of deficient levees according to the U.S. Army Corps of Engineers’ Levee System Evaluation Report. The estimated cost for Miller’s work is $22,952.
The levee district commission held its monthly meeting Thursday at the parish courthouse.
St. Mary Parish Levee District Executive Director Tim Matte said, “We think this is one of those items that the quicker we can get on this, it may be one of those things we can take care of the problem before it actually becomes an official problem.”
After this design work is complete, the levee district can ask the corps to come back and re-survey the levee system evaluation report for the Wax Lake East levees, Matte said.
Miller said surveying will begin in about a month.
Miller also agreed to look at an area of deterioration on the Wax Lake East levees near Cotten Road in Patterson.
Levee District Operations Manager Michael Brocato Jr. said the levee has “scoured” along the tree line. The Corps of Engineers was aware of the issue, but Brocato was told it is “a minor maintenance issue” the levee district has to address itself, he said.
Matte said he met with parish officials and a FEMA representative Sept. 18 before the federal government shutdown to discuss the status of the Digital Flood Insurance Rate Maps released in 2008.
They discussed “the concept of seclusion,” Matte said. Morgan City appealed the 2008 maps though the parish was ready to adopt the maps at the time. The parish could not adopt its maps due to Morgan City’s appeal, Matte said.
FEMA has come up with a proposal called seclusion to isolate an area where, for example, Morgan City’s maps could stay the same while the rest of the parish could go ahead and adopt the 2008 maps, Matte said.
Shona Gibson of FEMA, who Matte met with, offered the parish the opportunity to seclude Morgan City, Wax Lake East, and another small area so the parish could adopt its maps, he said.
The majority of residents in the parish would not see an increase in the base flood elevation used for determining 100-year storm protection with the 2008 maps, Matte said. “What seclusion would mean for the area that is secluded is that your map would stay the same because, until you get an updated map, you retain your original map,” Matte said.
“In Morgan City’s case, that would be the 1996 map, but it would be stamped with … more or less a warning: use at your own risk. For flood insurance purposes you’re still subject to the 1996 map,” Matte said.
FEMA also gives partial credit for levees that exist that do not meet the specifications for 100-year storm protection, Matte said.
For the Wax Lake East levees, Matte told Gibson that the levee district wants to move forward on upgrading those levees, he said. Gibson indicated that the levee district could probably take care of those deficiencies prior to adopting the maps, Matte said.
Therefore, the levee district would not have to seclude Wax Lake East from the rest of the parish’s 2008 Digital Flood Insurance Rate Maps, Matte said.
At the end of that Sept. 18 meeting with Gibson, the plan was for her to come to the parish with a document explaining what needs to be done to adopt the maps. However, since that meeting Matte has not heard from anyone with FEMA. “We don’t have a definitive answer on that yet,” Matte said.
“The bottom line on all of these situations is the maps that are in effect at the time are what determine your flood insurance rate,” Matte said.
Also at Thursday’s meeting, levee district officials announced that the Franklin Canal Flood Control project is scheduled to be complete by Nov. 4. Construction began on the project about a year ago.
The project consists of installing a barge with a floodgate that will be sunk when flood protection is needed on the Franklin Canal, Matte said. The gate will stay open 95 percent of the time. If a storm or high water event occurs and protection is deemed necessary, then the gate will be closed and the barge sunk, Matte said.
The levee district plans to eventually enter into an agreement with the City of Franklin to where the city will actually operate the gate, Matte said.
The Franklin Canal Pump Station project, for which the 100-percent design was submitted to the Coastal Protection and Restoration Authority in August, consists of installing a permanent pump station to pump the water out of the canal. The pumps would only operate when the floodgate is closed, Matte said.
In other business, the commission:
—Approved a resolution of support for the levee district to submit projects to the Coastal Protection and Restoration Authority for its state capital outlay request on Nov. 1.
—Approved a resolution for T. Baker Smith’s Morgan City Levee Improvements Contract Amendment to evaluate a potential “borrow site” on the Hellenic property in Morgan City near the La. 70 canal and to include the Siracusaville levees in the design work conditional on the drainage district’s approval.
—Approved sheet pile removal at Hanson Canal and Franklin Canal.
—Approved naming the Franklin Canal flood structure the Philip Luke Memorial Franklin Canal Closure in honor of a deceased commission member.