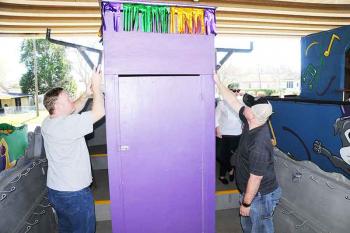 The Daily Review/Zachary Fitzgerald
Chris Eastling, left, and John Jones prepare to install a sound system Thursday on the Krewe of Adonis’ court float under the U.S. 90 bridge in Morgan City. The Krewe of Adonis parade will kick off the Tri-City area’s Mardi Gras parade schedule at 7 p.m. Friday.

Staff Report
Six area Carnival parades will be held in succession starting with the men’s Krewe of Adonis nighttime parade on Friday followed by the krewes of Dionysus on Saturday, Galatea on Sunday, Amani on Lundi Gras and Hephaestus and The Siracusa/Greenwood Community Parade both on Fat Tuesday.
Adonis
Adonis will hold the area’s only nighttime parade at 7 p.m. Friday. The procession will start at the intersection of Victor II Boulevard and Myrtle Street and proceed down Victor II to Brashear Avenue, Seventh Street, Marguerite Street, Sixth Street, Onstead Street and Federal Avenue where it will end on the corner of Brashear Avenue.
Dionysus
This year’s alternating Dionysus parade will be held at 2 p.m. Saturday in Bayou Vista.
Participants will line up on the corner of Jupiter and Delmar streets, and the procession will turn right on Delmar to Venus, Saturn, Southeast Boulevard, Canal Street, Teche Road, Fairmont, back to Southeast and turn right onto Belleview and proceed to its starting point on Jupiter Street where it will disband.
Members of the Krewe of Hannibal will parade with Dionysus.
Galatea
The women’s Krewe of Galatea will present its annual parade at 2 p.m. Sunday in Morgan City. The procession will organize on Second Street under the U.S. 90 Grizzaffi Bridge and proceed to Onstead Street, Sixth Street, Marguerite Street, Ninth Street, Clothilde Street, Victor II Boulevard and ending at the auditorium on Myrtle Street.
Members of the children’s Krewe of Nike will parade at the end of Galatea’s procession.
Amani
Amani will hold its Lundi Gras parade at 2 p.m. Monday in Patterson. The procession will line up at Patterson High School and proceed down La. 182 (Main Street) and end at the Place Norman Shopping Center.
Members of the Krewe of Hannibal will parade with Amani.

Siracusa/Greenwood
The Siracusa/Greenwood Community Mardi Gras Parade will also be held at 2 p.m. Fat Tuesday in Siracusa Subdivision near Morgan City.
Participants will line up on Siracusa Road at 1 p.m. and proceed to James Street and Grace Street before ending at the Siracusaville Recreation Center.
Members of the Krewe of Hannibal will participate in the community parade.

Hephaestus
Hephaestus members will parade at 2 p.m. Fat Tuesday in Morgan City. The procession will organize on Sixth and Sycamore streets and proceed down Sixth Street to Marguerite Street, Ninth Street, Clothilde Street, and Victor II Boulevard, ending at the auditorium on Myrtle Street.