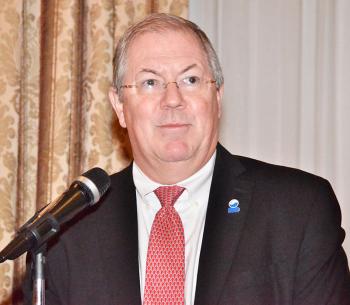 Stephen Thurston, vice president for Chevron North America Exploration and Production Co., speaks Wednesday in Morgan City. The potential for oil production in the deep-water Gulf of Mexico is promising, Thurston said. Less than half of the over 24 billion barrels of deep-water oil discovered in the gulf has been extracted, and another 11 billion barrels have yet to be found, he said. (The Daily Review/Zachary Fitzgerald)

Billions of barrels of oil sitting deep in the Gulf of Mexico paint a bright picture for the future of gulf oil production, a Chevron executive said Wednesday.

Stephen Thurston, vice president for Chevron North America Exploration and Production Co., was the speaker during Wednesday’s Atchafalaya Chapter of the American Petroleum Institute meeting at the Petroleum Club of Morgan City.

“There’s a lot of life left in the deep-water Gulf of Mexico,” Thurston said.

The Gulf is “an amazing oil rich basin,” he said.

An estimated 11 billion barrels have yet to be discovered in the deep-water Gulf. Workers should be able to extract that oil with the advances in technology the industry has seen, he said.

By 2015, industry officials had located 24 billion barrels in deep water.

The continental shelf, on the other hand, has been tapped heavily during the past nearly six decades.

“The shelf has basically spent 20 years at almost 3 million barrels a day, and then started to fall off with decline, and, also, with a lot of lost infrastructure due to hurricanes,” Thurston said.

Deep water has produced roughly 1 million barrels a day, “but it hasn’t been able to keep up with the decline of the shelf,” he said.

“We’re going to level out at around 2 million barrels a day in the deep water, probably for another decade or so,” Thurston said. “That’s a lot of work. That’s a lot of petroleum to be produced.”

Industry officials need to lower their production costs to make extracting that deep-water oil more profitable. The industry should strive to drop the cost required to produce a barrel of oil to $30, which the industry saw in 2002, 2004 and 2005.

If industry leaders don’t lower their production costs, the price of oil needs to get to the $70 to $80 per barrel range to be able to access much of the untapped oil in the deep-water Gulf, Thurston said. Brent crude oil was trading at about $55 per barrel Wednesday, according to nasdaq.com.

Ways to lower production costs include reducing the amount of specialty engineering, adopting existing standards and designs and removing some excess capital expenses industry has invested in.

Chevron was late diving into deep-water production, getting beat by Shell and BP. But, since Chevron jumped into deep water in 1996, “we’ve never left, and we’ve never lost our focus,” Thurston said.

To be successful in the deep-water game, companies must be good in every aspect of the process, including exploration, plan development, design and construction, installation, safety and long-term production.

“We can’t mess up any element of this, because if you do, it’s not good for the whole industry. And we know the effect of that,” he said.

Since the 2010 BP oil spill, Chevron’s production costs rose 20 percent due to increased safety measures. About 5 percent of that rise was appropriate for safety purposes, while the other 15 percent was “excess regulation,” Thurston said.

Thurston thinks President Donald Trump’s administration is willing to work with the industry and consider cutting some unnecessary regulations.